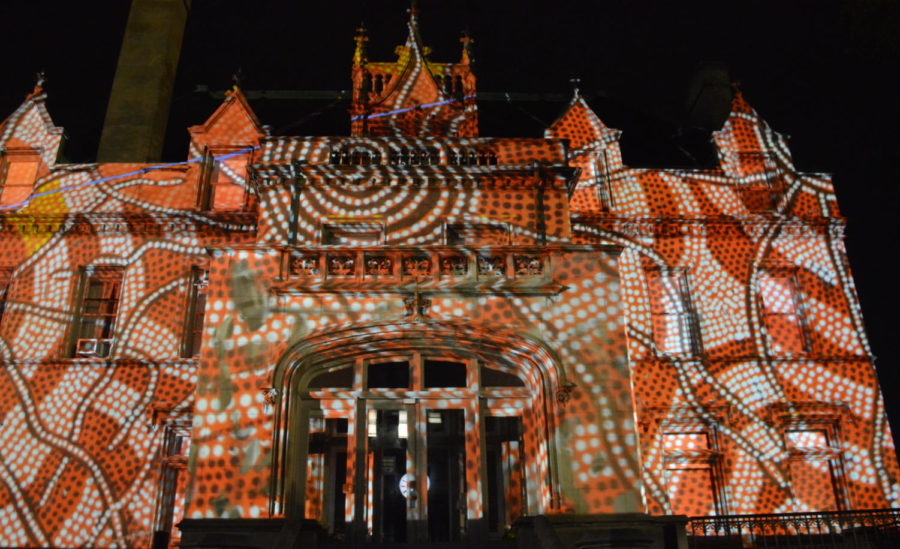 As a way to celebrate innovation on campus, the Sordoni Art Gallery, encouraged by President Dr. Greg Cant presented a new type of art exhibition on campus through the “Light the Way Forward” project.  “Light the Way Forward” was a collaboration between the gallery and the Kluge Ruhe Aboriginal Art Collection housed at the University of Virginia and featured 12 Australian Aboriginal artists from their collection and an Aboriginal musician duo, Electric Fields. All culminated in the artistry presented by video artist, Jeff Dobrow.

The project itself was a projected video mapping of Weckesser Hall.  This process is defined as a method that utilizes three-dimensional forms as a unique projection surface- meaning the surface to be projected on does not have to be a flat screen and instead, through a 3D model, can align video artwork to dimensional forms.

Dobrow was tasked with creating that virtual model of Weckesser Hall when he visited campus back in July.  From there, he designed a 6-minute work that featured paintings by Aboriginal artists.  They are:

This artwork blended one of the world’s oldest art forms with that of the most recent technology used by artists.  The original works are created from ground, natural elements to make the vibrant patterns on both canvas and the body.  The Sordoni Art Gallery chose to feature this artwork in honor of the inauguration of our seventh president, Dr. Cant.  Dobrow explains that the artwork, location, and music are all designed to work together as the completed artwork.

Dobrow however created a surprise piece for us as well, more within his aesthetic. He came into this artform after over 20 years in advertising.  He is a passionate advocate for sharing the potential of the technology, as witnessed by 17 DDMA majors who attended a projection mapping workshop before the event.  He shared his entrepreneurial spirit, the differences between two-dimensional and three-dimensional mapping and the work of leading projection artists working today. It was truly inspirational that provided context to what they would view later in the day.