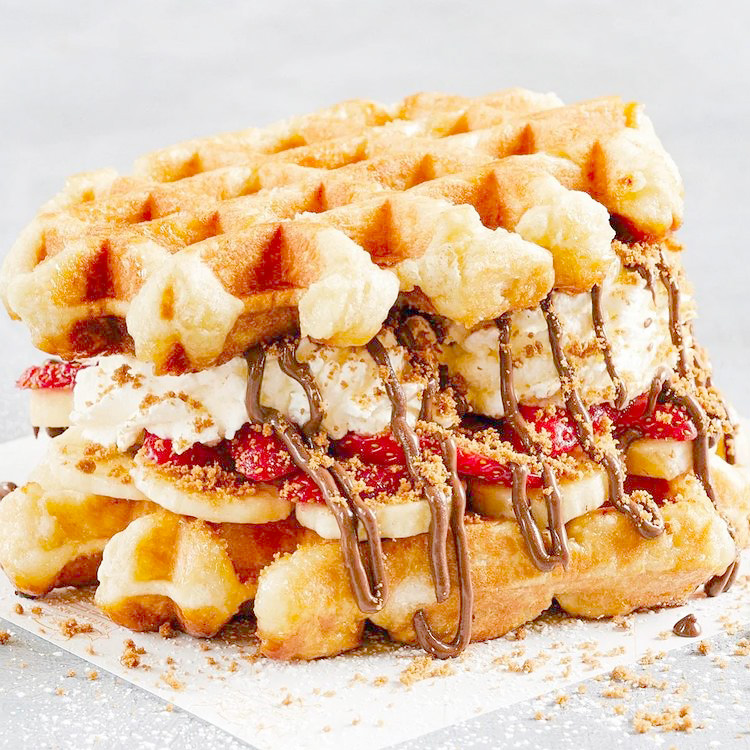 A Liège waffle with some bananas, strawberries and chocolate sauce.

What does it mean to have a delicious dessert in the Wyoming Valley? According to Toon De Schepper, sophomore sports management major, and Billy Berry, sophomore financial investments major, all it takes is crafting together a prime Belgian waffle recipe.

De Schepper, a native of Nieuwenrode, Belgium, came to Wilkes and met Berry. As they have been roommates since they were first-year students and teammates alongside each other on the men’s ice hockey team, their friendship grew immensely.

“I got to know (De Schepper) the first day we stepped on campus, and we both have played hockey our whole lives, resulting in our worlds colliding here at Wilkes,” said Berry. “We have been glued to each other’s hips since.”

In his time living in Wilkes-Barre, De Schepper discovered the revelation that something was missing in this region; all he asked for was to have a simple, authentic Belgian waffle. Unfortunately, he found a lack of such a thing — and he sought to change that.

“People would talk about how good ‘Belgian waffles’ are, but they have yet to experience an authentic Belgian waffle,” said De Schepper. “And because there is no similar food truck around the area, we thought it would be a great idea to bring that to Wilkes-Barre.”

Thus, their project was born: All Belgium, a food truck that seeks to bring authentic Belgian waffles to students and members of the Wilkes-Barre community. One day, De Schepper and Berry hope to turn their small business start-up into a large chain that reaches to all of the craving foodies of America.

“We are focused on our Wilkes-Barre truck for now, but we are planning on expanding with multiple food trucks in other cities across the country,” said De Schepper. “The end goal is to be a nation-wide-known company that serves Belgian waffles all over America.”

Despite having begun their project recently, All Belgium has already garnered a loyal fanbase in the Wilkes-Barre area, showing their loving support of De Schepper and Berry’s food truck.

“Keep it up boys, as it looks like it’s comin’ together,” read one comment online. The rest of All Belgium’s social media comment sections are littered with hearts and food emojis, eager to see the new food truck and get a taste of some freshly made waffles that hold the magic of Belgian culture.

As De Schepper and Berry further work diligently in crafting up some delicious Belgian waffle recipes, they plan to stop their food truck by the Wilkes campus some time in the near future. For further updates, follow their Instagram account @allbelgium and take a gander at their upcoming meals — just try not to drool everywhere.