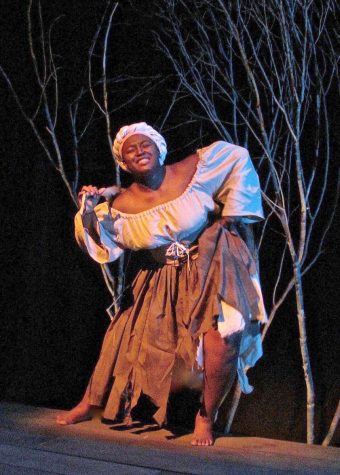 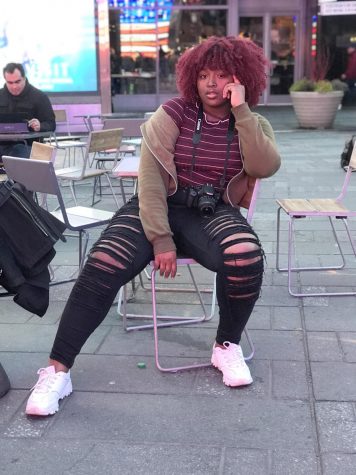 Creativity and art can be expressed through many platforms and with many outlets, and senior theater arts major, Mmachi Dimoriaku embodies this.

“I sing, I dance, I choreograph, I make wigs, and I even do photography,” said Dimoriaku.

She said that she has always felt creativity flowing through her, as her love for the arts sparked at the young age of four.

Dimoriaku said she remembers spending time with her family members and wanting to put on little “cartwheel shows” for them as she called it. It was from this point on that she knew performing arts was the career path she wanted to go down.

As Dimoriaku got older, her love for performance only grew as she began picking up dancing and choreography. When she was growing up, she was heavily involved with two traditional African dance groups in her hometown of New York City. With her group, Dimoriaku traveled around the boroughs of New York to perform for small audiences and even made money from it.

Once she was accepted to and and began to attend Wilkes University she began to immerse herself into college life. Aside from her studying for her gen-ed classes, she discovered other aspects of the campus and the greater Wilkes-Barre community that allowed her to express her love for the arts. She took her love for dancing one step further and got into developing different types of choreography.

More recently, Dimoriaku joined organizations on campus like Wilkes African Cultural Association (WACA) which allowed her newly found choreography skills to flourish. With this club, she is able to create dances for the club to practice and master.

“I decided to really push myself to be more, and just like creating movement. It started when I came here but it really cultivated when I was here,” said Dimoriaku.

Now WACA not only performs at several events on campus, but she and her club take their dancing to other areas, such as the annual Multicultural Parade, and events at the Wilkes-Barre Geisinger Medical School.

Her creative juices don’t stop flowing at theater and dance, as Mmachi also picked up hobbies like photography and wig-making during her college years.

Around the spring semester of 2017, Mmachi started getting into photography.  She enjoys taking photos for fun, like different city skylines and taking headshops of those who request them. She has recently taken many headshots of her fellow classmates in the theater arts department. She was able to help them get their professional headshots to submit for future jobs.

From there, she decided to extend her small side business to that of anyone who wanted professional photos at a low-cost price.

“I am nowhere near professional, however, I make sure my pictures are able to be used professionally in any medium,” said Dimoriaku.

Photography is not the only thing Dimoriaku turned into a small business for herself. She also picked up doing hair, and even making wigs from scratch her freshman year.

This all started because, in Dimoriaku’s hometown of New York City, there are so many places that you can go to get your hair done, but when Mmachi’s moved to Pennsylvania, she quickly learned there were nowhere near as many places she could go to.

The places that she did find, were much more expensive than the places back home. Dimoriaku made a conscious decision to learn how to do hair instead of spending so much money.

Then, she began watching tutorials on how to create wigs and started to practice making them.

“All through freshman year, I just started wearing wigs. Then that transitioned into my sophomore year when I started getting better at it, so I started buying better hairpieces and making wigs completely myself,” she added.

Once she perfected the art of hair on her own and showcased her work, people around her started to take notice and wanted her to do the same for them. So, she began doing so for low-cost prices.

As apart of her major, Dimoriaku has also been featured in various plays and musicals on campus including “The Crucible” and “Little Shop of Horrors.”

Creativity can be expressed in many ways, and through many outlets. Dimoriaku’s means of expression snowballed from one to another. She started with being interested in the performing arts, then wanted to become involved in dancing and choreography, then photography, and finally hair.