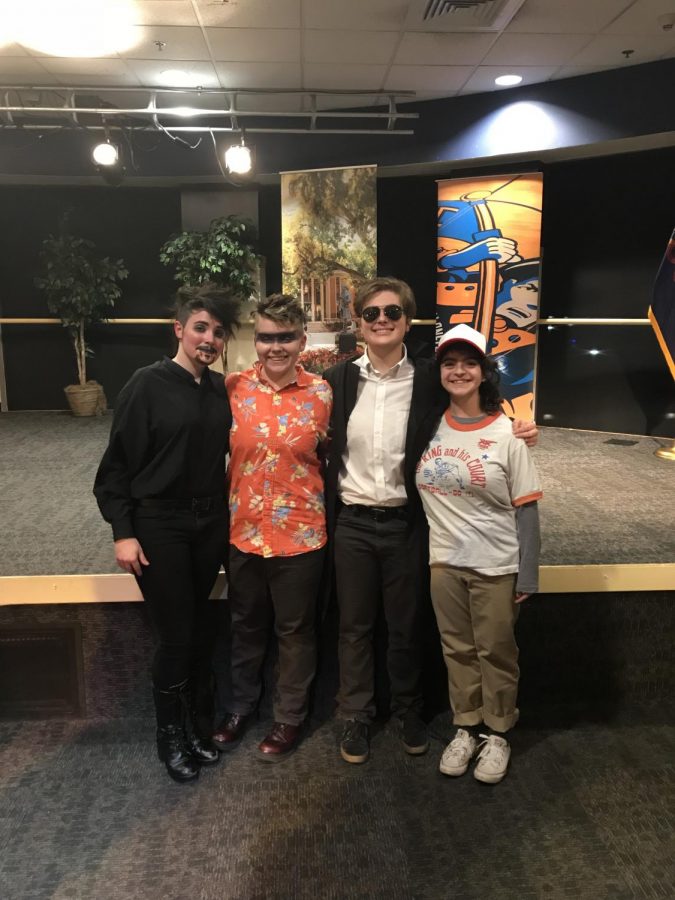 Last Tuesday, the Wilkes Gender and Sexuality Alliance (GSA) hosted a drag show in the Ballroom of the Henry’s Student Center.

The club chose to host a Drag show specifically because of its current popularity due, in part to shows like RuPaul’s Drag Race. The show had four kings (female performers who dress in masculine drag): three from Heat, a local bar and nightclub, and one Wilkes student.

“The goal of the show was to get awareness of the LGBT+ community and to spread the club,” said Lindsay Becker, the Vice President of the GSA.

Justin Dance, a Wilkes student, performed did a rendition of the character Dustin Henderson from Stranger Things that completely shocked the crowd into silence. The Heat performers, named Andrew Odgenous, Pete Sweet, and Jack Mehof were equally silencing. Andrew Odgenous has been performing for three years, Jack Mehof for two, Pete Sweet for less than one, and this was Justin Dance’s first performance.  Each of the actors were able to incorporate their own style in order to personify the Kings that they played in the show.

“I don’t think a single person was ready for one of our very own to be so great at performing,” said Rashonda Montgomery, a first year student at Wilkes University.

Becker, who had been somewhat concerned with the amount of support the event would receive. However, people were crowding in to see the show. It was full of support and positive attitudes from the audience.

The event ran out of pizza due to the amount of people that attended the event. GSA hopes to continue running events like this one in the future. If you are interested in becoming involved, the GSA not just for members of the LGBT community and anyone is welcome to join.

“The club is more than welcome to allies,” said Kylie Dillon, the president of the GSA.

The next meeting for the club is this Friday, Nov. 2. The club is always welcoming new members. The goal of the Gender and Sexuality Alliance is to ensure a welcoming and safe environment and to lessen the stigma surrounding the LGBT+ community.

Dillon continued this sentiment by saying that, “My favorite part about being involved in the club is probably just getting to meet so many different people, especially because I think that there’s still this really weird stigma about being gay or bisexual or pansexual or whatever sexuality someone identifies as…there’s a lot of uncomfortableness about it and I want that to be more open.”