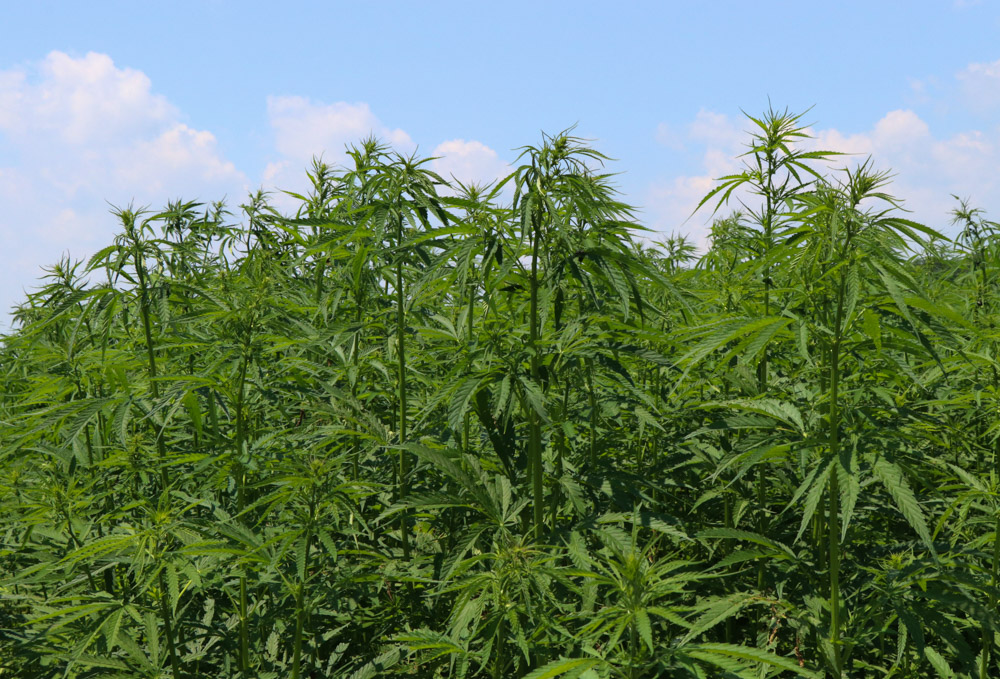 In 2017, Rodale Institute received one of 16 permits to partake in the inaugural planting of hemp in Pennsylvania in more than 80 years, as part of the Pennsylvania Department of Agriculture Industrial Hemp Pilot Project. Industrial hemp, a versatile plant grown for its fiber, seed or oil, was a valuable cash crop and a major industry in Pennsylvania for more than 260 years.

Due to hemp’s close relationship to the marijuana plant, hemp production became a casualty of a 1933 law banning marijuana, and was later named a Schedule 1 drug by the Controlled Substances Act of 1970. However, changes made to the 2014 Federal Farm Bill now allow for hemp to be grown for research purposes by the Pennsylvania Department of Agriculture or an institution of higher education.

“Before hemp production was banned in the United States, hemp was grown and marketed for a tremendous variety of uses. In the decades since, Pennsylvania has missed out on valuable economic opportunities. We’re hopeful that these research projects spur the return of a promising crop and decreased dependence on imports,” said Pennsylvania Secretary of Agriculture Russell Redding.

Rodale Institute is conducting a four-year research project that focuses on using industrial hemp as a cash or cover crop to address weed pest issues and enhance soil health in organic agriculture. The two field trials, a Variety Trial and a Weed Suppression Trial, will help to identify which varieties of hemp will be most effective for future use by farmers. In the Variety Trial, researchers aim to find which types of hemp grow best in a Mid-Atlantic climate and produce the most amount of fiber. The Weed Suppression Trial will analyze how farmers can best compete against weeds by using hemp as a rotational crop rather than tillage.

“We are going to be utilizing hemp in our crop rotation as a cash/cover crop that is going to be able to fill in the canopy rather quickly and help to be able to suppress weeds from being able to germinate and grow. From the data that we have, we see that hemp does have a lot of strong interactions with the biology in soil in enhancing the nutrient content, the fertility of soil and soil structure, which are all very important to enhancing soil health,” said Dr. Kristine Nichols, chief scientist of Rodale Institute.

The research project also includes a Weed Seedbank Study where soil samples collected before seeding and after harvest will be mixed with vermiculite, transferred into flats and placed in a greenhouse. The soil will be watered regularly to stimulate seed germination and then the weeds will be counted as well as identified.

“The fact that this is happening at Rodale gives a stamp of integrity and authenticity to this pilot project concerning growing hemp,” said Dennis Kucinich, former Congressman and two-time presidential candidate. “This pilot project here at Rodale is going to produce information that hopefully will inform the rest of the country about the great potential that hemp has an agricultural product.”

The 333-acre farm is home to just over an acre plot of farmland reserved for the different varieties of hemp seeds. These seeds were planted in early June of this year.

“As farmers, our job is not to produce food. It’s not to milk cows. It’s not to grow corn. It’s to produce healthy people. Everything that we do in relationship to food and soil is all focused around making people healthy,” said Jeff Moyer, executive director of Rodale Institute.

Industrial hemp has more than 25,000 reported uses. In addition to being a superfood, hemp can also be used to make body care products, fuel, paper, fabric and building materials. The seed, oil and fiber of the hemp plant may all be used to create a wide variety of products healthy for people, animals and the earth.

“I think the one message is that healthy soils not only will make healthy people, but we can also make healthy oceans, which are the number one supplier of oxygen and provide so much diversity for species on the planet. Hemp can play a great role in that,” said John Roulac, founder and chief executive officer of Nutiva.

Hemp is an environmentally sustainable crop that sequesters carbon from the atmosphere, therefore mitigating the rising rate of CO2 levels that are responsible for climate change. There is significant potential for hemp to play a role in reducing market dependency on non-sustainable industrial agriculture and energy practices. This crop can be used to create environmentally friendly packaging materials and biodegradable plastics for water bottles, car parts, CD cases, bags, mobile phone cases and furniture.

Not only is hemp an extraordinary crop for the environment, but it also has nourishing health benefits for people. Hemp contains all ten essential amino acids making it a complete protein. It is also an excellent source of dietary fiber and Omega-3 and Omega-6 essential fatty acids.

“Hemp needs be part of a mainstream conversation of what’s in the American family’s pantry. We need parents picking up hemp milk, picking up cereals, picking up whatever it is and understanding that it is an incredible product for their family,” said Colleen Keahey, executive director of Hemp Industries Association.

Hemp is often overlooked because of its relationship to the marijuana plant. The levels of TetraHydroCannabinol (THC) in this crop are so low, it is impossible to experience euphoria from smoking hemp. Hemp contains a greater percentage of a different cannabinoid, Cannabidiol (CBD), which actually blocks the marijuana high.

Although industrial hemp is grown in more than 30 countries, the United States still remains a nation that imposes some restrictions on hemp cultivation.

“Here we are, we have almost a $700 million market and almost 100 pecent of that has been imported. We’ve got farmers in Canada, farmers in Europe, farmers all over the world that are growing this crop, and they’re shipping it here to the United States. Now we are finally just beginning this breakthrough, and we are starting to see some American-made hemp products, and this is wonderful, but we need to see more of that,” said Eric Steenstra, president of Vote Hemp.

The Rodale Institute Industrial Hemp research project is one step closer to breaking new ground in the movement to expand hemp farming legalization to farmers and communities across America. After this trial period, researchers hope that hemp will become a staple crop in the farming industry.