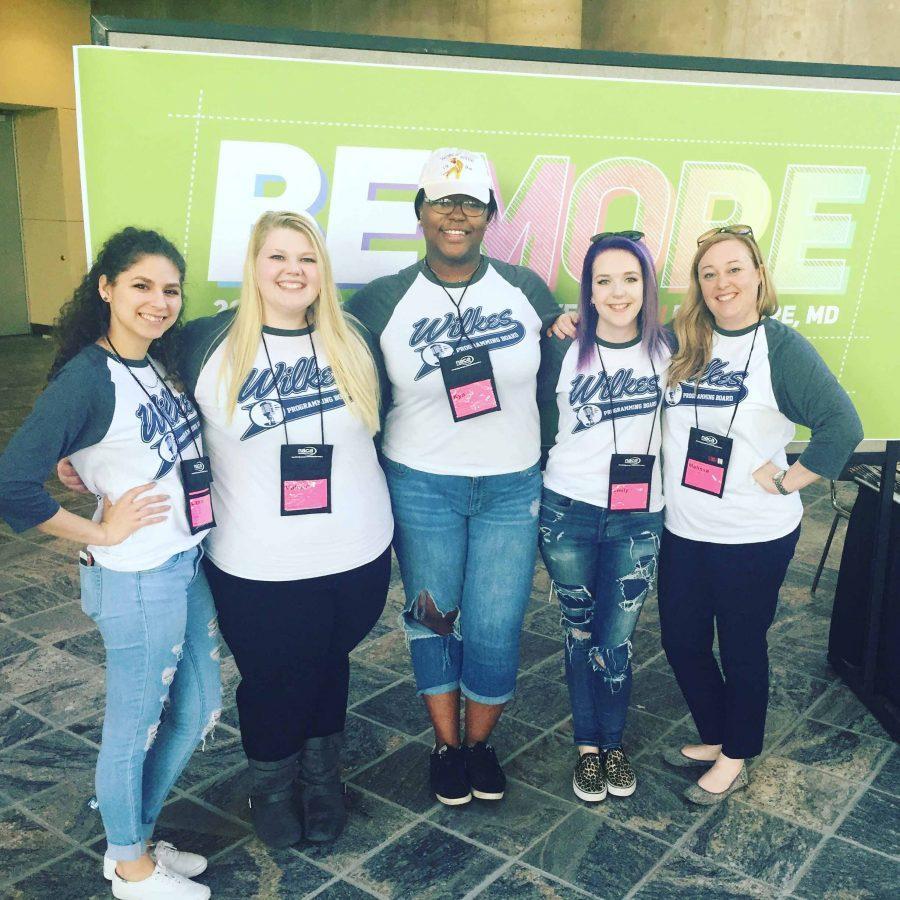 Wilkes University’s Programming Board (WUPB) attended the National Association for Campus Activities’ (NACA) National Convention which took place in Baltimore. Four students from the executive board, along with Melissa Howells, the club’s advisor attended the four-day long convention.

The convention is filled with great entertainment, business connections and education and professional development opportunities.

Valerie Woods, President of WUPB said, “Going for the third time this year to the national convention what I always take away is how many event possibilities exist. Vendors and performers always blow my mind with their creativity and talent.”

While at NACA, Programming Board attended education sessions about different program ideas, new ways to get members and how to keep members, and other leadership sessions. They also were able to see various comedy and music showcases.

Leading up to the event, Emily Taylor, Secretary said she was most excited about being in the city of Baltimore. “I had been there before and really liked the city. I was also really excited to sit and watch so many different types of entertainers,” she added.

Taylor will be running for President of Programming Board for the 2017-2018 school year and she found the convention to be very beneficial looking towards the future.

“The most beneficial thing about the NACA conference for me was the ability to network with so many different people. Not only did we meet other student’s who were a part of Programming Boards at their own schools, we met various comedians, singers, and other performers and were able to speak with them and their agents to get an idea about who would be good for Wilkes,” she said.

“The most beneficial thing about attending NACA were the sessions that we went to it taught us how to interact with the newer generation, and how we can get them more involved on campus,” she said.

Woods added, “The conference runs from 9am to midnight so there is a multitude of things to do. We were able to watch showcases which consist of comedians, magicians, bands, slam poets, magicians, contortionists, and anything else you can think of. We also choose 4 different educational sessions to attend, and were able to meet new vendors, and mingle with other schools nationwide at the NACA marketplace.”

Looking towards the future, WUPB members are looking forward to bringing back the things they learned at the convention to the campus.

“I’m so excited to have brought back the information of so many comedians and musicians!! I think we have a lot of new and fun ideas to bring in for the next few semesters,” Taylor said.

Lewis said, “I learned so much, but mostly to improve attendance at our events we need to market and include our younger generation in a way they will respond to, and allow them more responsibility and encouragement in whatever they do for them to feel included.”

There is a campus programming board at almost every collegiate school you go to, while they may not always be called the same thing and have different organizational structures.

“It’s always refreshing to see that Wilkes offers so many things to students, and the members and advisors of WUPB put their all into building an event every week. Also we’re open to any suggestions for new events or feedback for returning events. Since we do an event every week we want to keep them new and as exciting for all students as possible,” Woods Said.