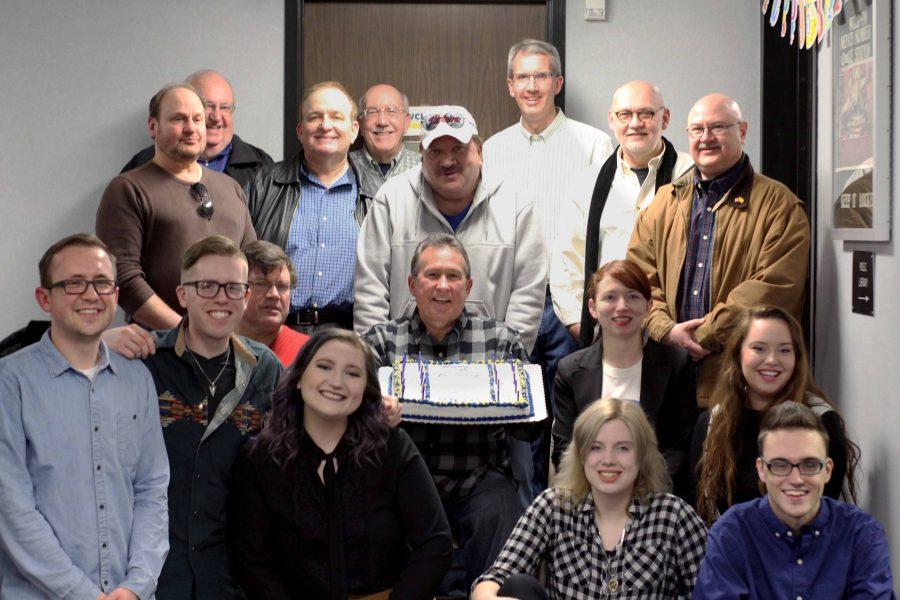 The campus radio station, WCLH, turned 45 on Feb. 6. In order to celebrate, the station held a birthday party that alumni and current staff attended.

The executive staff worked diligently to pre-produce a five hour show that was aired on Saturday. The show featured the past four decades that WCLH has been broadcasting along with alumni interviews and archived audio and music. Each staff member was in the show highlighting a different decade.

As an Environmental Engineering student, Cody Colarusso said the radio gives him a place to break the constant school work cycle.

“As a member of the e-staff, I have grown closer with students that I wouldn’t have met if it weren’t for radio since they’re not in my major,” He said.

Some alumni who attended the anniversary showed up with the friends they met through WCLH.

Tom McGuire said,  “My best man DJ’d with me at the station, and if it wasn’t for the radio, I wouldn’t have met him.”

“And I DJ’d that wedding,” Rockin’ Rich (Rich Nordeim) said as he rounded the corner to join the conversation.

WCLH has been providing the Wyoming Valley and surrounding areas with student produced programming since 1971. The station offers a variety of music genres including metal, alternative and hip-hop music as well as specialty programming and sports coverage.

Over the last four decades, WCLH has achieved some great accomplishments. A few years ago, the staff launched a new program, Receso Comunitario. This program is produced entirely in Spanish and can be heard across the globe through online streaming.

Like most college radio stations, WCLH is student-run and over the last four and a half decades, WCLH has achieved some great accomplishments.

The station received an award of excellence in broadcast journalism from 1978-1980 as well as in 1985 by the Professional News Media Association of Northeastern Pennsylvania.

The alumni who attended the celebration were happy to see that the awards they got during their time at the station were still hanging with pride in the radio studio.

McGuire said, “It’s awesome to see that the award we got for all of our hard work is still being showcased here,” when looking at the awards on the wall.

Aside from the awards, they were shocked to see how different the station is today compared to their time here. Some even remember setting up the station right before the Great Flood.

WCLH will be moving into the new Media Center on Main Street, so alumni were able to see the station how they remember it right before it moves in the fall of 2017.

“One the biggest highlights for WCLH has been the ability to keep our equipment and software current to reflect what’s being used at commercial radio stations,” Kristen Rock, station manager said. “From vinyl to cart machines to compact discs and MP3’s, WCLH has been able to provide students with quality hands-on training while giving listeners great programming.”

Rock said that she hopes people tuned in for the broadcast because it’s an amazing opportunity “to hear where we’ve come from, where we are now and where we plan to be in the future.”