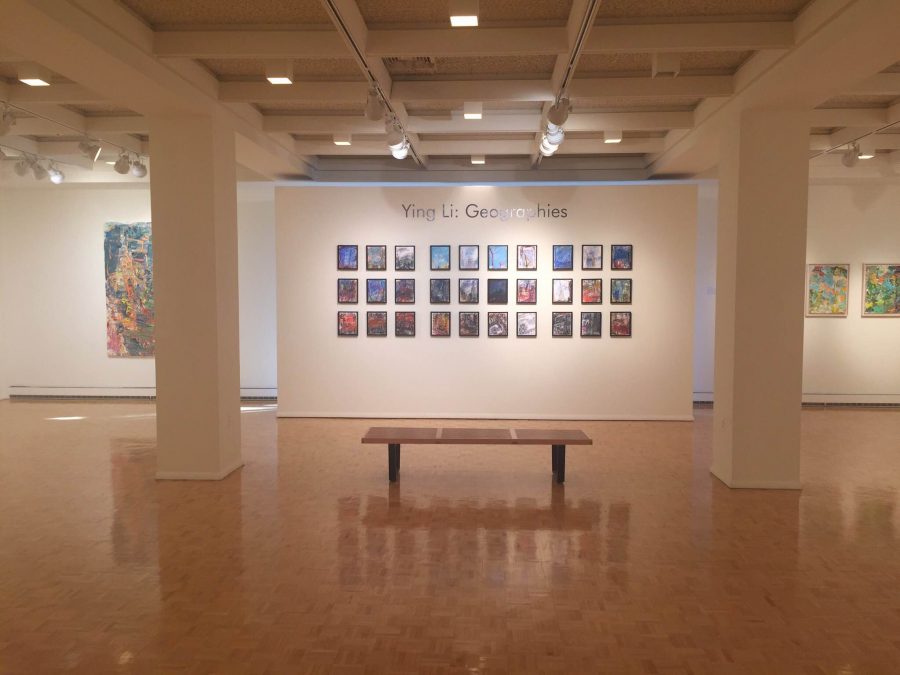 Born in Beijing, Ying Li obtained a degree from Anhui Teachers University (1977) and taught there from 1977-83.  Li fell in love with a man she met at the top of Yellow Mountain in China.

She and Michael Gasster, who was at the time studying Chinese history abroad, soon married and she immigrated to the United States to live with him.  Li earned her MFA from the Parsons School of Design in 1987.  She is now the Department Chair and Professor of Fine Arts at Haverford College outside Philadelphia.

Heather Sincavage is the Director and Assistant Professor of the Sordoni Art Gallery.  She said that Ying Li has been painting all of her life but her work was always realistic in nature until she came to the United States.  She sort of “exploded” in a way and began painting expressionistically.

“You can see the budding of a person within her paintings.  Her art moves from very controlled work to a person with a lot of energy.”

The exhibit is curated from a larger showcase at Haverford College.  Bringing it to Wilkes was “a team effort spearheaded initially by Stanley [Grand].”

Sincavage said an interesting aspect about her position is that by the time she started her position at the university, this exhibit was already arranged and she had to begin planning the next shows.  With art, she is constantly moving forward.

“Geographies” is different from the last exhibit at the gallery in that it is a solo exhibition.

Having an expressionistic style, Li seeks to convey her inner experience by distorting rather than directly representing natural images.  For this reason, visitors may not first recognize the scenes she has depicted.

“What interests me is movement and change in nature instead of capturing something still,” Li said. “It’s not about describing or illustrating what I see. It’s about something more permanent.”

She utilizes unconventional techniques to create one-of-a-kind pieces.  Li uses her palette knife, incorporates broad strokes of her brush, and even directly applies paint from the tube to the canvas.

Margaret Galatioto, a student who holds a work-study job at the gallery, finds the texture of the paintings interesting.  “The artwork comes out at you.”

Traveling to and from different locations inspired Ying Li’s compositions.  While there are four main geological locations from which the collection stems, Sincavage comments that it “all seems to blend into a cohesive body of work.”

The locations acted as a “catalyst of Ying’s paintings.”“A lot goes into arranging art in the gallery,” says Galatioto. In the Sordoni Art Gallery, Ying Li’s  art is arranged by different locations.

Besides traveling, Ying Li also educates.  One thing she does not do is show her pupils her own work.  Galatioto said she thought it was neat that she “never wants to influence her students.”

Ying Li is all about the artistic response and is not pushing any personal agenda.

“She is a lovely person,” attests Sincavage.

Ying Li’s exhibition, “Geographies” will be on display until December 18.

Sincavage is looking forward to the new home for the Sordoni Art Gallery in the building that previously housed Bartikowsky Jewelers.  The move is in motion and the new gallery is planned to open next academic year.  The new location will be more visible downtown on Main Street, and it will have double the space of the current location in Stark Learning Center, giving it a significantly greater presence on campus.

The change in location will certainly “spotlight the art space,” says Sincavage, who likes to think of the art gallery as an “alternative to the traditional classroom.”

Sincavage wants to use the gallery in a way it hasn’t been used in recent years by expanding programming to include concerts and pecha kucha, a fast-paced Japanese style of art presentations. She is in the process of getting Wilkes-Barre involved in the Pecha Kucha 20×20 organization.

Art is not a standalone process. Sincavage hopes to “draw from other thinkers” with the new gallery.  “I’d really love to engage the community way beyond the walls.”