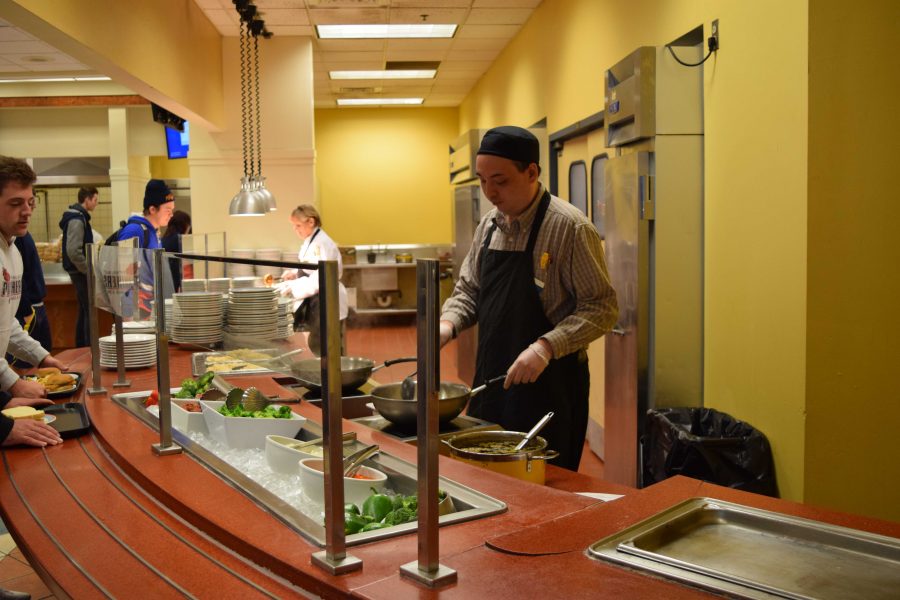 The Wilkes Dining Hall strives to “go green” and meet the needs of the community as a whole.

“On a corporate level we use all sustainable seafood, we do a lot of sustainability in our cleaning products as we can,” Jerry Bogdan, the general manager of Wilkes University Dining Services said. “Even our floors are cleaned with electrically charged water.”

The dining hall also uses its own recycled napkins.

However, the greatest sustainability issue the dining hall faces is the trays said Bogdan.

Currently the dining hall is trying to implement “Trayless Tuesday” to help reduce our carbon footprint throughout campus Bogdan said.

“We have taken a lot of steps to do sustainable practices, but there’s always more you can do,” Bogdan said.

Is it possible that trays may become a thing of the past in time to come?

“That’s really going to be driven by the student body and the faculty and staff. If they do it, we are here to serve them and meet their requirements,” Bogdan said.

Some students are in support of going completely trayless whereas others enjoy the convenience and hope that the trays do not disappear from campus.

“I don’t think it would be a good idea to go trayless because although it would be greener for the environment, a bigger hassle would be created in order to move food from point A to point B,” George Benjamin, freshman biology major said.

Although there are many students who choose to use trays, Catherine Sarver, senior pharmacy major, believes that going trayless is an adjustment that could be made.

There was a study done by a professor and environmental engineering students at American University of Washington, D.C. Dining hall trays were made unavailable to students and the dishes were collected for weighing food waste.

More money is saved and less food is wasted by going trayless. The environment and the University both could benefit from this approach.

If you have a suggestion or would like to see further improvements, be sure to fill out a comment card in the dining hall.

Wilkes dining encourages students, faculty and staff to fill out their online survey. This will allow them to better understand on your preferences and overall experience with campus dining.

Visit http://www.collegesurvey.com/wilkes to complete the survey by Nov. 4.