The F.M. Kirby Center for the Performing Arts turns 30 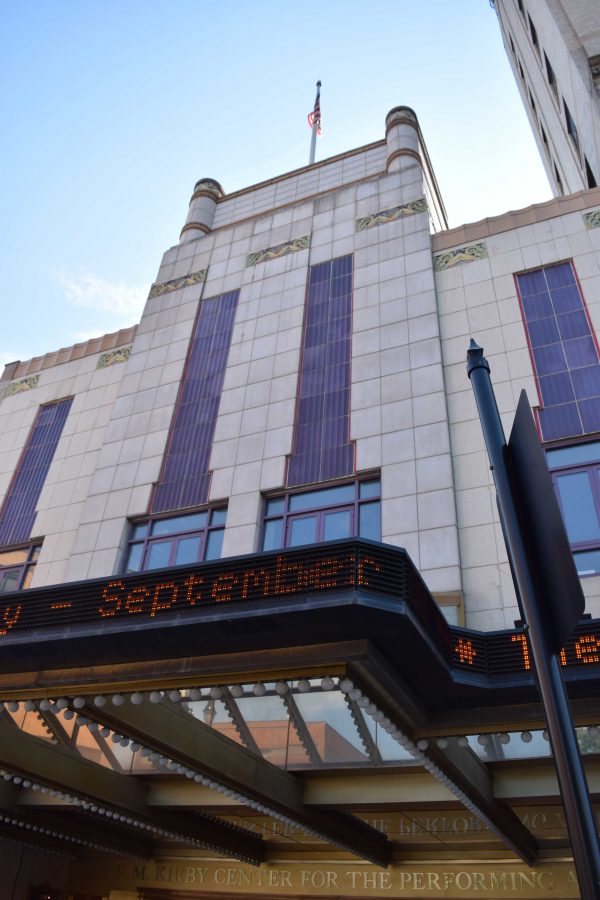 The F.M. Kirby Center for the Performing Arts reached an impressive milestone on September 19: thirty years since the theater was reborn and opened to the community. Its rich history traces farther back than that.

In 1937 the Comerford movie chain chose the current location on Public Square as the site of the flagship of the M.E. Comerford movie chain in Northeastern Pennsylvania and New York.  Elaborate plans, which included a lavish interior, rose-colored mirrors, and a chandelier called the “Giant Lavaliere”, soon followed.

After an anti-trust lawsuit, the ownership switched hands and it was renamed the Paramount.  The theater operated successfully for another 27-year as a “majestic, single screen movie place,” even surviving the infamous 1972 flood, until economic hardship caused it to shut down in late 1977.

The theater went through a period of odd undertakings during the late 1970s and early 1980s.  Once showing movies, the building was now home to televised boxing matches.  The box office was gutted, lighting fixtures were sold, and the astounding architecture was dwindling away.

With no regard for historic value, it seemed that fate had demolition in store for the structure.

A group of locals joined forces to save the building.  They coined their cause as the acronym STOP, standing for Save The Old Paramount. Through their dedication, the building was added to the National Registry of Historic Places in 1978, ensuring that it could not be knocked down.

The building was technically saved but remained abandoned until Albert Boscov, the owner of Boscov’s department store, and August L. Simms came along to rally local businesses and community leaders to raise the necessary funds–$3.3 million–required to bring back the theater.

Everyone from labor unions to little children responded.

The largest benefactor was Fred Morgan Kirby II and the building was named in honor of his father, a Wilkes-Barre native.  On Sept. 19, 1986, the theater reopened with a ballet performance accompanied by the Northeastern Philharmonic that kicked off its “Celebration Tour.”

The community fought for the restoration of the theater decades ago and is certainly not foreign to the F.M. Kirby Center today.  When asked what has made the theater successful for the last 30 years, Anne Rodella, the Director of Sales and Marketing, said that the “support of the community” is a tremendous factor.

She was quick to also acknowledge the “hardworking staff” that makes everything at the Performing Arts Center possible.

Lauren Menn, the Marketing and Public Relations Coordinator, agreed with Rodella.  She says the Executive Director, William M. Beekman III is the “greatest person” for the building, remarking that the “risks he takes on shows give us a huge return.  We’re going strong.”

Rodella commented on Beekman also, saying that he is “aggressive on bringing in events.”  He was especially zealous in booking Jake Shimabukuro, a ukulele player, for Nov.  18 this year.

The Kirby Center houses all types of events, from the big stars to the novices.  As a few staff members said, Jerry Seinfeld doesn’t know he’s paying for the opera when he hosts a show here.  The staff is more concerned with introducing a variety of events rather than merely worrying about the dollar signs.

The 2016-2017 season features several series: Wells Fargo Concerts & Comedy Series, PNC Celebrity Series, a Broadway series, and a Signature Series.  There is also a circuit of shows that will be performed in the lobby area, which is called Live from the Chandelier Lobby Series.  The Kirby Center offers a number of family and kids shows as well.

Splatterday, a day-long Halloween film series event will take place on Saturday, Oct. 26.  A full listing of the schedule can be found on kirbycenter.org.

The success of the theater is recognized worldwide.  Fans travel the distance to get to this beloved theater.  In June, Poll Star ranked the F.M. Kirby Center number 99 in the world for ticket sales at a performing arts theater.  IIBA listed it in the top 10 among theaters in big cities like New York.

Carole Antolik, who has been with the Kirby Center since the beginning (Day two, to be exact), reflected on volunteers who have touched her heart over the years.  She has met every type of person while working there and has “no complaints,” adding that those who donated their time to the theater have made it so successful.  “It is an excellent group of people.”

“It’s not your average place to work.  It’s a family.”

Antolik described the theater as “keeping the city alive.”

The city may not be the only thing it is keeping alive.  “If it wasn’t for this, I’d have been dead 10 years ago.”