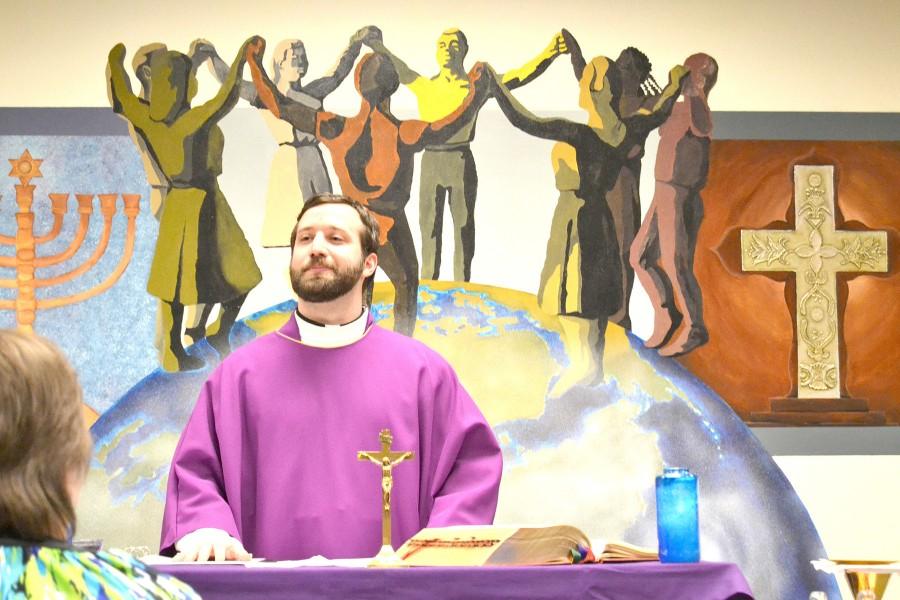 Ashes were also distributed throughout the day on the second floor of the Henry Student Center.

Many students and faculty members received ashes between class periods and wore them with their heads held high.  Some of these students were asked what they plan to give up for the next 40 days. The most popular answers consisted of relinquishing their reliance on fast food and desserts.

“It’s not exactly healthy food,” said Jessica Baker, senior psychology student. “It’s not good for me, so I’d like to eat better.”

While a large portion of those surveyed pledged a healthier diet, there were students who decided to make unique and personal sacrifices. Kayla Hiryak, junior pharmacy major, will also be giving up a particular food, but her choice runs a little deeper.

“I really like Cheez-Its,” Hiryak admitted. “I basically live on them as my snack of choice, so it’ll be really tough for me to go without them.”

Danay Rosa is a freshman at Wilkes University who plans to give up two things she said will be difficult to live without.

“Well, I’m giving up watching my television shows,” Rosa said. “I normally feel like I can’t live without them. Oh, and I’m also giving up cursing.”

Emma Leach finds herself heavily involved within a number of organizations on campus. Her vow for the Lent season is one we may all find to be  useful.

“I plan on giving up procrastinating,” Leach said. “I can’t tell you how that’s going to work right now.”

The next 40 days will hopefully be a success for those who celebrate the season. As students test their self-control or continue with business as usual, all are invited to attend Interfaith services each week.