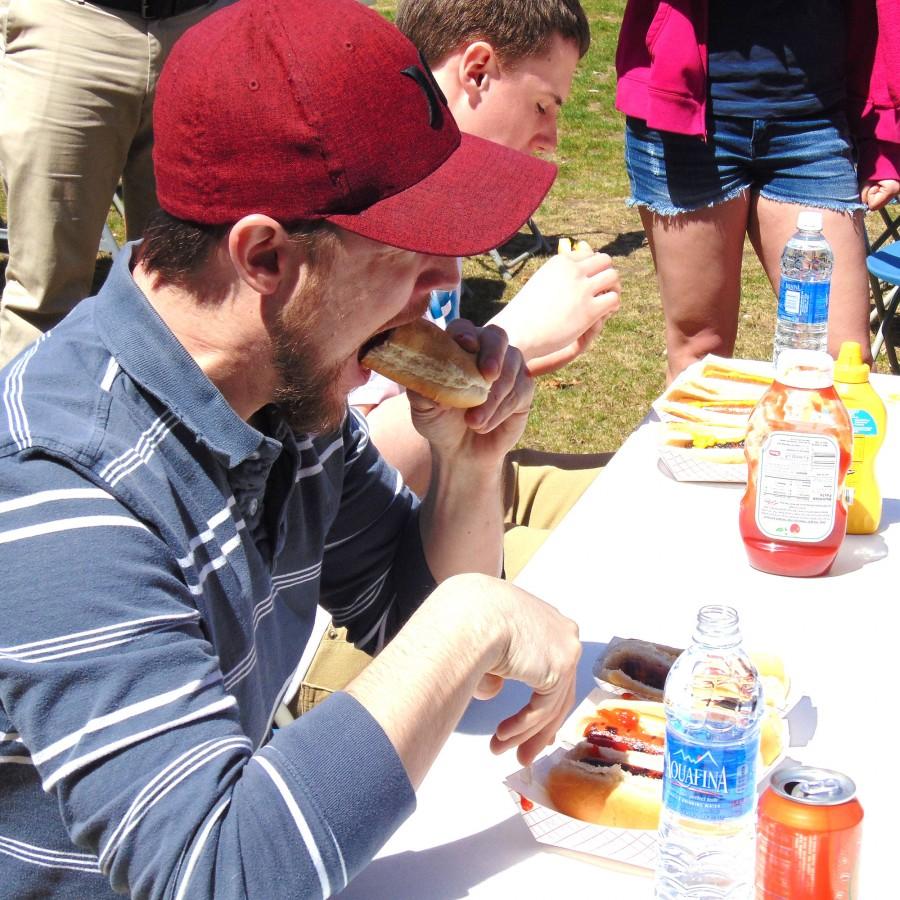 If you weren’t at the Student Union Building getting something for lunch to fill your dietary needs, at the library crunching down on that last minute work for a 1 P.M. class, or in class being prepared for your future you probably should have been on the greenway where the Student Veterans Council hosted a hot dog eating contest from 11 A.M. to 1 P.M.

Hot dogs were offered for $2 along with a free drink and a bag of chips which were $1. However, not only was it just a place to eat hot dogs and enjoy the spring air, but it was also a fundraiser for homeless veterans.

According to the National Coalition for Homeless Veterans, 12% of homeless adults are veterans. All though that number may or may not be staggering, the Student Veterans Council ran with the slogan “They fought for us let’s fight for them” which signifies the importance of these men and women which make up that 12%

According to sophomore Kellie Palko who is the president of the Student Veterans Council the goal for the club was to raise $1000.

They were also hosting a clothing drive where, for a donation of two articles of clothing a person would be offered a free bag of chips. The Student Veterans Council was also selling Wilkes shirts for $5.

The hot dog eating contest cost $5 to enter and the prize for whomever ate six hot dogs the fastest was awarded a $25 gift card.

“It’s cheaper to get six hot dogs for $5 than buying one hot dog for $2,” said sophomore Gabrielle Baran, “it also provides people with an incentive.”

Everyone involved was also guaranteed a stomach full of hot dogs.

The contest started at 12:30 p.m. with four hungry and passionate individuals racing to devour six hot dogs each. Those who participated consisted of senior Corey Purta, sophomore Will Richardson, sophomore Kelly Egan and freshmen Eric Geiger.

Egan and Geiger expressed that they would rather relax instead of rushing to eat their six hot dogs, while Purta and Richardson battled for the prize. Purta, who was the winner of the contest, commented, “It’s simply a good way to support the club and their purpose.”

Those in attendance were also urged to donate by texting the number 56512 with the word “home.” Donations can still be made to this number.