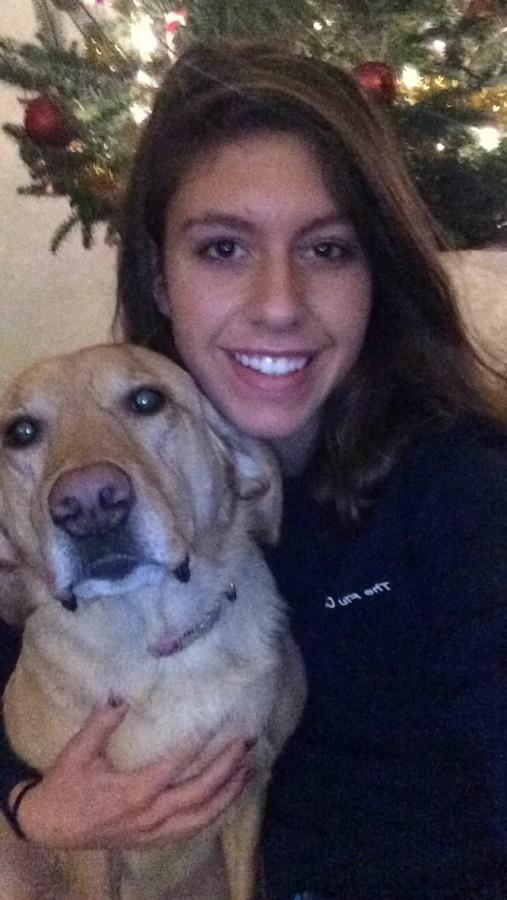 Walk into University Towers, take the elevator to the ninth floor, walk to the end of the hallway, and knock on the door of room number 970.  Michelle Kuzma, a Wilkes University senior pharmacy major, will answer.
She isn’t the stereotypical P2 student submersed in books, labs, and organic chemistry equations.  Instead, she has dedicated a large portion of her life at Wilkes to mentoring residents on campus as a Resident Assistant or RA.
Michelle has been a student at Wilkes University since the first day of her freshman year.  She was born in Pittsburgh; however, she grew up and attended school in the small rural town of Penns Valley near State College.  Her involvement with volunteer work at a veterinarian hospital played a role in her choosing pharmacy as a major.
“I’m really passionate about pharmacy,” she said.  “In the future I hope to either specialize in a particular drug field or work in retail because I like interacting with people.”
She is the only child of Terence and Donna Kuzma.  Her father is a professor at Penn State University, where Michelle has taken several courses to gain credits for her pharmacy major at Wilkes.
The family also has three dogs named Emma, Megan and Darcie.  Michelle raised Megan as a Seeing Eye dog for her senior project in high school.  The dog has remained a part of the family ever since.
This semester marks Michelle’s third year as a RA at Wilkes.  She was originally motivated to become a RA while touring the campus for the first time when she was still in high school.  The fact that resident assistants had a room and bathroom to themselves was a primary attraction for Michelle.  Not only was the personal space appealing, but she also wanted to help mentor other residents.
“More than anything I wanted to be a role model for residents to look up to and respect,” Michelle said.
“I also just wanted to make others’ college experience as pleasant as possible by understanding some of the obstacles they may be facing.”
Currently, Michelle is the RA on the ninth floor of University Towers.  She began as a RA her sophomore year and in the past has been placed in Evans Hall and Catlin Hall.
Placement is completely random.  The Office of Resident Life typically tries to match an RA’s personality to a group of residents; however, the resident assistant never has too much of a say as to which building they are assigned.  This is Michelle’s first year being a RA to a group of mostly upperclassmen.
Meghan Kisela, a sophomore pharmacy major, is one of Michelle’s residents in University Towers this semester.  Meghan spoke highly of Michelle, saying that she is very bubbly, pleasant, and personable.
“Every time I run into Michelle she’s always is in a good mood and asks how I’m doing,” Meghan said.
“She’s helpful, too.  When I needed help with organic chemistry I felt perfectly comfortable seeking her assistance.”
Michelle explained the process of becoming a resident assistant.
First, an application must be filled out.  Any student who has lived on campus for a year has the opportunity to apply.
Then, applicants must write mini essays and obtain two letters of recommendation from other resident assistants on campus.
In February, applicants participate in group process, which includes interactive activities with other resident assistants.  The process concludes with an interview held by the director and assistant director of residence life.
Jamie Miller, assistant director of residence life at Wilkes, explained that there isn’t a particular type of person they look for when selecting resident assistants.
“We hire young women and men who are well-rounded, would be a good fit with our returning staff and would serve as role models for our resident population,” Miller said.
“The major qualities we look for in a candidate are maturity, knowledge, and academic success.”
In Michelle’s opinion, one of the primary responsibilities of being a RA is insuring the safety and well being of the residents.  Also, as a RA, Michelle is responsible for 20 hours of desk duty, completing two to three rounds during the semester, being on call, hosting programs, and creating a bulletin board every month.
According to the Wilkes University website, “Resident assistants serve as tremendous resources and have been trained to assist students in a wide variety of situations.”
Michelle does not find the job to be overly demanding.
She uses her position to meet new people and gain experiences with different personality types.
“It has become a part of my life,” she said.
“Being a RA has enabled me to develop great leadership and personal skills.  I will definitely be a RA for the rest of my time at Wilkes.”