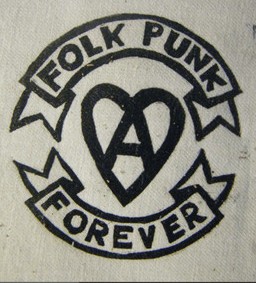 Folk punk is not a genre people are talking about. It’s not a genre that calls attention to itself. It’s not inclusive, nor is it exclusive. It’s both infuriatingly charming and laughably cliché.  Yet, this duality within the very style of the music itself tends to give it an edge unlike any other.
While folk music arguably died as soon as Bob Dylan picked up an electric guitar, a magnetism remains within the recordings of the bygone folk era of the 1960s.
These minimalistic recordings, often featuring little but an acoustic guitar and a singer, bring music to its very core and either give one a visceral reaction or makes one fall in love with it.
Much like folk, many believe the era of quality punk music has been over for years.
Overtly political or controversial in nature, the bands that founded punk rock didn’t care about playing complicated stuff. They didn’t care about writing clever lyrics or singing in tune.
All that really mattered was the passion of the music.
It may be hard to see the parallels between punk and folk, as they are two vastly different genres, but once one thinks about it, it was inevitable these two things would be combined. Folk and punk take simple melodic structures and make them meaningful. Folk and punk can do without heavy studio production and many of their respective artists would like it that way.
David Hage, a Wilkes-Barre singer-songwriter who plays predominantly original folk music, explains “Both styles of music tend to skip the B.S. of modern music and cut to the chase. So, folk punk is a naturally impatient genre.”
Hage has been performing for years around the area at open mic nights. His fingerpicking acoustic style is all folk. But his lyrics, often relating to the problems with living in a city that looks like it’s slowly dying, have a hard punk edge to them.
“I wouldn’t necessarily call my music folk punk, but, you know, if the shoe fits.” Hage laughs.
He adds “I’ve seen a lot of young musicians come out of nowhere and do a few folk punk songs at open mics. Usually all original music. It’s really strange. It’s like nobody can really recognize the trend in the subculture.”
And while folk punk stays popular within any given youth subculture, it hasn’t exactly established the popularity something along the lines of EDM (electronic dance music) or country pop.
“I think what you’re going to see is a bunch of kids picking up acoustic guitars because they’re sick of all the synth and computerized drum beats on the radio. If folk punk becomes popular, it’ll be because it’s the exact opposite of what’s considered popular now.” Hage elaborates.
Popularity or unpopularity aside, folk punk, being a growing genre, is bound to make some realize that maybe the meaning behind the music is more important than a catchy chorus. And even still, maybe it will show people that sometimes reinvention is the purest form of flattery.