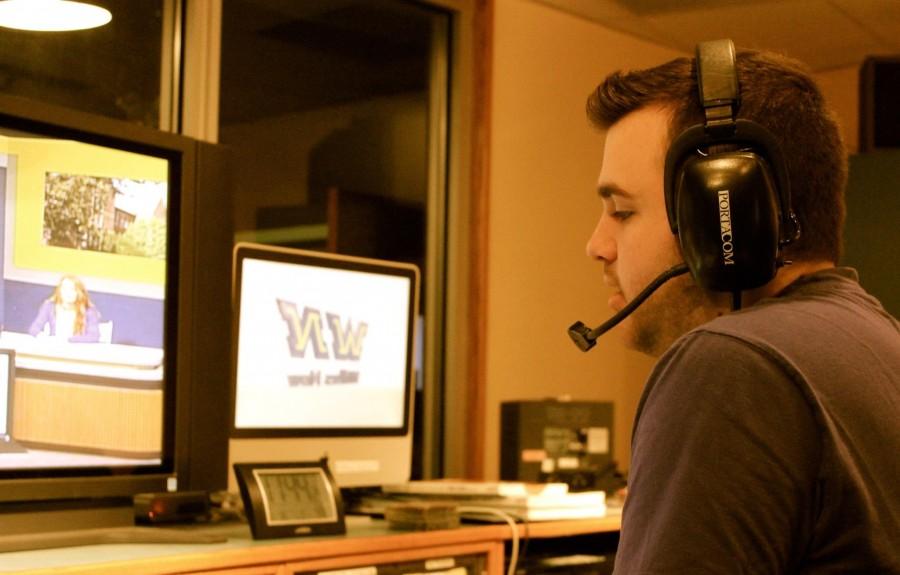 Begin with a chair. Now add a table and place carpet under it. Build a wall and add a window. Now, incorporate some form of scene décor, a photograph, a plant, or a curtain perhaps to hide the nothing beyond the window. Perhaps the space needs something.

Now you’ve got the room. It’s time to add a bit of light. You begin with an ordinary white light, adding some red and a touch of yellow. Finally, you give it a touch of blue or purple.

What you’ve created is a living room, a space where the action of a story will take place; where actors can play and perform before a live audience or in front of a camera.

“It’s the simple joy of creating something from nothing for the sake of entertaining people,” Joshua Solarczyk said. “If I could draw some emotional reaction from someone with the stories I’ve told, then I’m happy. I’ve done my job.”

Solarczyk is a Senior Integrative Media student who currently holds a Bachelor’s Degree in Technical Theater, which he earned in the spring of 2014 from Wilkes University.

Solarczyk came to Wilkes from Lehigh Carbon Community College with an Associate’s Degree in Television and Film, but found his love for the art and creativity of film making in middle school, in Palmerton, PA, where he was inspired by one of his teacher’s, Ben Paruso, who was instrumental in his early life.

“I was an extra in a film that he made when I was in the third grade,” Solarczyk explained. After than, Paruso remained on of Solarczyk’s instructors until he graduated from Lehigh Carbon County College.

While attending Wilkes University, Solarczyk busied himself learning the art of stage lighting and design, a craft he said he could not hone without the help of Bruce Phair, Manager and Technical Director of the Dorothy Dickson Darte Center at Wilkes University.

“I Learned so much from Bruce. I’m thankful for his knowledge and guidance throughout my education,” Solarczyk said. “He had a way of preparing me for the road ahead without simply handing me what I needed walk that path and get to my destination, so to speak.”

Solarczyk laughed as he told an anecdote about his first lighting design project where he said he made an unusual choice for illuminating the actors on-stage.

“I used a green light,” he smiled. “Everyone on stage looked like the Incredible Hulk. It was so horrible. When I asked Bruce why he didn’t warn me his response was priceless, but very true.”

“Well,” Bruce said, according to Solarczyk. “I could have told you not to use green on stage, but if I had you would have never had the experience. Then, what would you have learned?”

“He was right.” Solarczyk laughed. “I mean I thanked him, but it would have been helpful to know that all these green people walking around the stage wasn’t very pleasing to the eye.”

That’s the thing about learning, he explained. You really need that real-life experience to figure it out for yourself.

“Even though I wasn’t a Broadcast Communications major, I was still very intrigue by the process; the camera-work, the production and pre-production. I wanted to learn the details involved.”

Solarczyk began as a camera operator and went on to construct a new set for the station.

“When I first arrived, Wilkes Now only had one set that was kind of old, so I went to the advisors, Dr. Stine and Carl Brigido asking if I could rebuild the set.”

After deciding upon a budget, Solarczyk said that he went to work and build a new set as his first major contribution to Wilkes Now.

Eventually he would be hired for the position of Station Director where he would be not only in a position to be more affective as member and leader, but also learn even more.

“After learning everything I could I wanted to create a solid core for Wilkes Now, a foundation to build upon for the future. Because no matter what happens, the technology may change, but those same concepts are still going to be there.”

Solarczyk’s tenure as station director ended in the spring, but he was asked to return to Wilkes Now by the current executive staff as a newly appointed position of Senior Producer and Advisor.

“Dr. Stine, Carl and the newly appointed officials felt that I could still be of use and that I still had something to offer, so they asked me to come back in an advisory role.”

Beyond the boundaries of Wilkes University, Joshua Solarczyk has been hard at work putting into practice all the things he has learned from his experiences with Wilkes Now and The Dorothy Dickson Darte Center.

“For two years, I was producing a horror film called Within the Woods of Undead County, a seventy-two minute feature film about people trying to survive a zombie outbreak.”

After the film was completed it was featured at a rec-carpet premier in Solarczyk’s hometown where he got to see, firsthand, the fruits of his labor and hard work of his dedicated cast and crew earn a standing ovation in a small theater in Palmerton, PA.

“I didn’t watch the movie. I spent the entire time watching the audience and gauging their reactions. You have no idea the feeling of satisfaction that I had when the movie ended and people liked it. That was the most rewarding experience.”

Solarczyk begin working on his next film project in 2014 when he received news that would change his life and bring everything he had been doing to a dramatic and tragic halt when his older brother, Christopher sadly took his own life.

“I was getting ready to go into production on a short film when I learned about my brother and the world just stopped,” Solarczyk said. “It was so shocking. My world was turned completely upside down. Like anyone else, I completely shut down.”

Solarczyk defined his brother as his role model. He looked up to him and explained that no matter where he was, what time it was, or what kind of trouble he might have been in, his brother Christopher would always be there for him.

“I didn’t have to think of who to call. I would just think to myself, ok I need to call my brother. Suddenly, that wasn’t true anymore. I had just lost the most important person in my life.”

Solarczyk said that after months of mourning the loss of his brother and having lived like a hermit shut away from the world; he finally decided that burying himself in grief was not what his brother would have wanted for him.

The short film entitled The Little Things was back in full swing.

“It’s about appreciating, as the title suggests, the little things in life that we would typically take for granted. Your mom’s homemade apple pie, a kiss ‘goodbye’ or handshake ‘hello’,” Solarczyk said.

He is traveling between Philadelphia, PA and Boston, MA where The Little Things is being filmed.

In the meantime he is completing his degree in Integrated Media and is scheduled to graduate from Wilkes University this fall.

Solarczyk said that when the film is completed, The Little Things will be dedicated to the memory of his brother whose loss has inspired Solarczyk to take nothing for granted and really take time to sit back and appreciate the finer things in life that he might otherwise have not given much thought.

“My journey at Wilkes University spanned two and half years. I met some wonderful people and made some really good friends. I had some great experience but like anyone, I had hard times and I want to thank everyone who helped me thought that.

“All of my friends and professors, Eric Rodrigo, Teresa Fallon, Bruce Phair, and Dr. Mark Stine for the knowledge and skills. Without them, I wouldn’t be who I am today and I wouldn’t be outfitted with the skills necessary for a bright and potentially successful future,” Solarczyk said with gratitude.