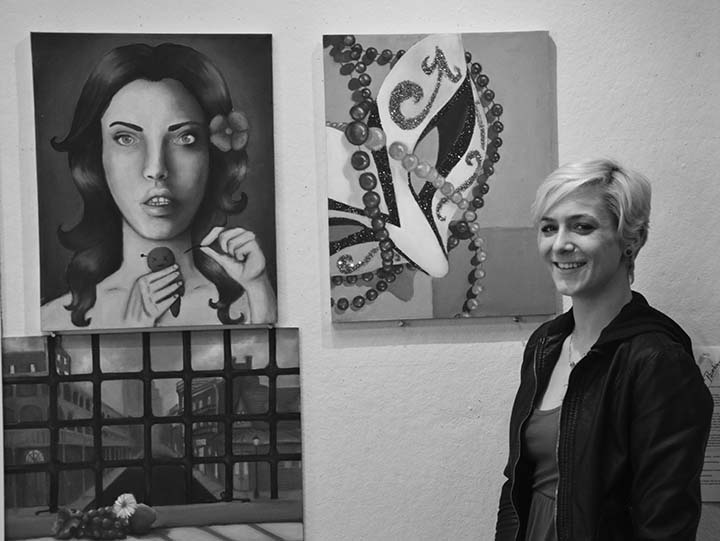 Junior history major Jacquie DeLucca poses in front of her paintings on display in Bedford Hall.

On the backs of tests and homework assignments, some students will scribble stick figures or draw cubes made from connecting lines together.

Others will write their names in bubble letters, or perhaps write the name of a loved one encapsulated by a heart.

Jacquie DeLucca prefers flowers, like the kind she admits to scribbling on every Bio 105 quiz she’s taken this semester.

“It’s like a little present for the teacher,” she said. “I imagine seeing that breaks the monotony of grading.”

DeLucca, a junior history major armed with minors in English and studio art, said that art – whether it be a Renaissance-era masterpiece or an absentminded doodle – should make people feel.

She draws the flowers, she said, in hope that she’ll brighten the professor’s day.

“Art is all about letting people see your work and making them feel something,” DeLucca said, pushing back her bleached blonde hair, the fifth color it’s been since the fall semester – the true sign of an art student.

“It’s supposed to evoke an emotion. I think that’s one of the things that makes us special as human beings….Our humanity is defined by what we make and how it makes other people feel.”

DeLucca is no stranger to art. She was enrolled in painting lessons early on, taking a strong focus on oil painting. She would later dabble in ceramics and print-making, but said that oil painting is still her favorite medium because it allows for a large amount of realism.

DeLucca’s work has been featured in Bedford Hall, the university art building, as well as in the Wilkes-Barre/Scranton International Airport.

She has also had her work displayed at a number of “First Friday” events in Scranton, where, on the first Friday of every month, local art is displayed in bars around the city.

A large part of DeLucca’s interest in art is attributed to her upbringing; her father is a musician, and her mother is an artist-turned-hairdresser. DeLucca said being surrounded by creativity at a young age helped develop her fascination with art.

She also said she believes that creativity is in everyone, it’s just a matter of coaxing it out.

“I think everyone needs some kind of outlet, whether it’s sports or music or drawing, it doesn’t really matter what it is, as long as you have somewhere to put your creative energy,” she said.

“As human beings we are incredibly creative, and I don’t think we have enough outlets for that anymore. I think that reality calls for pragmatic and logical ways of life that are contrary to what the dreamer in all of us needs.”

DeLucca hopes to one day develop this creative passion in others, by teaching at a university and publishing scholarly articles in her field.

“One of my biggest interests would be to combine art and history and make a difference in the way people understand history through art, because art is an expression of a culture,” she said.

“It’s really about what was going on in a society and why they made certain artwork and why that resonated with them.”

Even though certain pieces may mean one thing to certain people, art is interpretive – it can carry different meanings and reverberate differently with everyone. So what does art mean to DeLucca, an artist?

“Art is a piece of you,” she said. “It’s a safe haven. It’s a place to go that’s really within yourself to feel OK.”