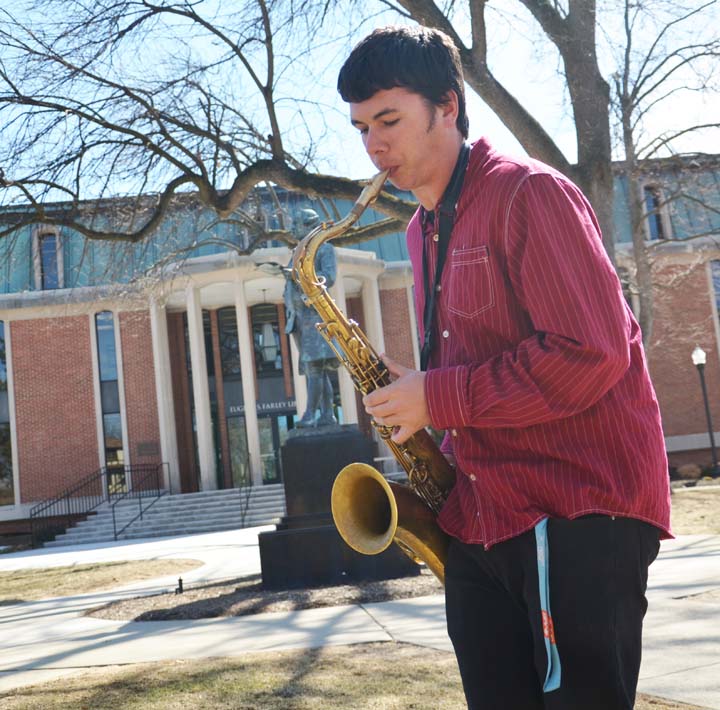 As a pharmacy major, sophomore Collin Strunk has been trained to look at life by the book; most science majors can relate, having had to cram facts and formulas into their heads for exams, making sure they can recall every detail correctly.

For Strunk, playing music is an escape from that.

“When you’re playing the sax, especially in jazz, it’s so free,” he said. “People just want to hear what you can do.”

Strunk, who hails from a small town called Pocono Summit, has been singing in choirs since his early childhood. He started playing saxophone in the fifth grade and discovered he enjoyed it a lot more than the formal structure he found in choir.

He credits his interest in jazz music to the established jazz scene surrounding his hometown.

He spoke specifically about the Deer Head Inn, a live jazz venue in the Delaware Water Gap he visited for the first time in ninth grade. It was here would find a passion for jazz, and it was here he would later share the stage with national names like Phil Woods.

Strunk said he considers himself fortunate to have played and become friends with talented musicians who travel all over the world.

“I’ve met so many great people. Even if I’m not as good as them, just playing with them and talking to them raises my level,” he said. “It’s just nice to be around them.”

“Everyone is so inviting,” Strunk continued. “You’ll never find a jazz musician who won’t talk to you. Everyone’s so friendly and so open, they all want jazz to grow and expand.”

In addition to performing at the Deer Head Inn, Strunk plays back up sax in a wedding band with Kenny Lucky and Wayne Bishop, two of his old high school band instructors, a unique opportunity that he admitted thoroughly enjoying.

“Honestly, that’s the most fun because they can see how much I’ve grown on my own,” he said. “I can still learn from them. I get to listen to them but it’s not just them teaching me anymore. It’s me actually getting to play music with them.”

Strunk said playing with Bishop is especially rewarding because he was the instructor who has had the most influence on his playing.

Performing with instructors isn’t something new for Strunk though; he currently plays with the Wilkes Jazz Ensemble under the direction of Nick Driscoll, who Strunk said has an approach to conducting that only a jazz musician could, often taking written pieces of music and dismantling them to create something entirely new.