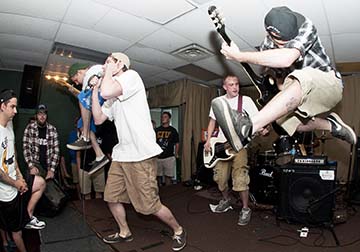 Shorthand, a pop-punk band from just outside Scranton, will soon be releasing their EP. In the meantime, fans can enjoy a performance on Feb. 13, when the band will play with Turnstile, a hardcore band from Baltimore-D.C. area.

Bands from a multitude of genres will converge to play a show at West Side Park Feb. 13 in Nanticoke.

Less than 10 miles from campus, the show is one date of a tour that features Turnstile (Reaper Records) and Diamond Youth (Run For Cover Records), with support from Angel Dust and Blind Justice, and local support from Shorthand and Noise Pet.

Featuring hardcore, indie, punk and rock, those involved spoke positively about the variety of bands on the bill.

“The fact that shows with different bands that play different genres of music happen so often now says a lot about the scene as a whole. We’re thankful for the opportunity to be a part of that.”

After permanent area venues like Redwood Art Space and Café Metropolis closed down, shows have been held at several different locations, including the VFW Hall in Nanticoke. Local show attendees, however, do not seem to mind the temporary spot.

“I think West Side Park is a great venue. The shows there can get pretty packed and it’s always great to see friends,” Daniel Schultz, vocalist of Take Control and venue frequenter said.

“Obviously Redwood will always be missed, but as of right now I’m happy there is a place I can go to and watch a bunch of really cool bands. I’m glad that the scene around here isn’t dying and won’t die anytime soon.”

“It’s great to have somewhere to call our temporary home,” Kaitlyn Kishbaugh, local photographer, said. “Turnstile has played before and it was really fun, and I’m sure it’ll be a great show.”

Even with main venues being closed, those involved in the area’s music community seem to show their support now more than ever. Perhaps, as the members of Shorthand explained, the dedication comes from the fact that the area itself is home to a community of people who truly care.

“Everyone’s really supportive and it’s really cool,” Adam Wallitsch, drummer of Shorthand, said. “It’s just cool being from an area where so many people are in to the same thing.”

Shorthand released a demo in 2012 and plan on releasing their EP within the next month. Until then, readers can see them play Feb. 13 with Turnstile and Diamond Youth at 389 W. Grand St. in Nanticoke. The show starts at 5:30 p.m., and admission is $10.