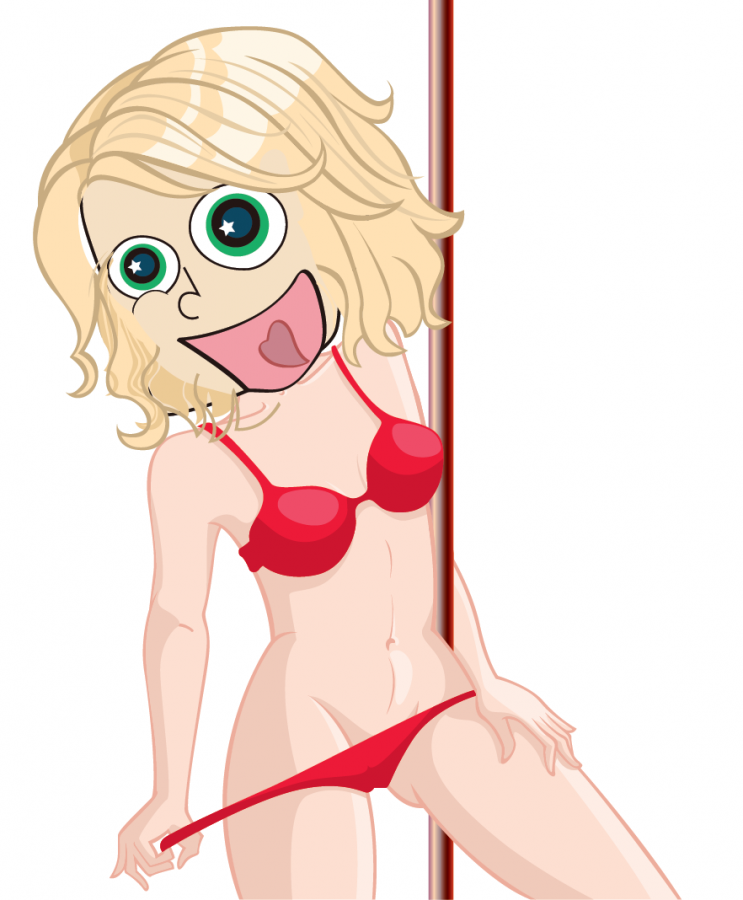 Most of the girls prefer the term ‘dancer’,” London says, “but I like ‘stripper’ better.’

“London” isn’t her real name, of course. But it’s the one by which she dons and doffs her skimpiest attire imaginable whilst twirling around the poles of Gentlemen’s Club 10 in Wilkes-Barre, a job she’s held for just over a year now.

“I had gone there a couple times and I had done Amateur Night. I went up against these three other girls and won. It was a lot of fun and very exhilarating,” she explains.

“Shortly after that I went back to the club to apply for a different position. They’d already filled that position, but they did offer me the dancing job. I wasn’t sure if that was something I wanted to do at first, but they were very nice and welcoming. Me and my friends stayed around for a while, spent some money on the girls and enjoyed at the atmosphere.

“By the end of the night, a few of the girls got me to come up onstage and dance with them, and I realized how much I enjoyed being naked in public. It was great.”

Though she regularly bares all for fun and profit, one thing London keeps close to her (topless) chest is her real name. She’s not ashamed of what she does. Far from it. In fact, she says prior to becoming a dancer herself, she admired the women who worked at the club, noting that the job requires more skill and strength (both physical and mental) than many people might recognize.

Nevertheless, she likes to keep her personal and professional lives separate, a distinction she laments that not everyone seems able to make.

“People who come to the club sometimes want to mix the two worlds, but you don’t go into a strip club to find a woman to date. If you see them in public, they’re not the same person you see on the stage. In there, it’s a job. People don’t always understand that. They don’t realize that when you leave you have your life and you back to it.”

For London, stripping is less about getting naked and more about selling a fantasy.

OK, maybe not more, but at least as much. In any case, the problems occur when customers try to make fantasies into realities. But London equates her job somewhat to that of an actor, with the role of “London” being a character she plays. Not entirely fiction, it is often just an exaggerated version of her normal self.

Key word there: “normal.” London is quick to rebuff the cultural cliché that strippers are all damaged junkie-prostitutes with no other options.

“There are definitely misconceptions. I’ve always said that there are stereotypes in this world for a reason, however, they’re obviously not all true. Some people have more problems than others. Some people have their daddy issues or their babies or their drug addictions. For the most part, though, the people I work with are just normal girls in college trying to make their money,” she says.

“People think stripping is the easy way out, that you’re doing it because you can’t get another job, but I don’t want to. I love beautiful women. Who doesn’t?”

That begs the question, then, does dancing make London feel beautiful? Objectified? Empowered?

“Some nights are better than others. Sometimes I feel all in the clouds. It does make you more aware of your appearance. But I think it’s definitely helped my self-confidence. It’s just like any other job. I actually felt more objectified as a waitress. This is something I choose to do because I want to. I enjoy it. I’m in control.”

Feeling’ clueless about the titty bar scene? Don’ t get caught with your pants down, literally or figuratively. Check out this oh-so-important…

…bring lots of paper money, mostly small bills, but don’t rely entirely on ones if you’re thinking about getting a private dance. The only thing worse than tipping a dancer with pocket change or by trying to swipe a Mastercard between her boobs is paying for a $40 dance in singles.

…let yourself get pressured into getting a private dance if you don’t really want one. Private dances are big business for the girls, so of course they want you to get one, but don’t feel obligated. Remember, strip clubs are supposed to be fun. Choose  how you spend your money (and who you spend it on) wisely, based on your own personal tastes. No one else’s.

…tip the bartenders and waitresses, too. Not just the dancers. You take care of them, they’ll take care of you.

…spend beyond your means. No one likes a cheapskate, but no one likes a broke-ass mofo either. It’s easy to lose track of your limitations when the booze is flowing and the boobs are bouncing, but reign it in. Don’t keep the money coming just to keep the party raging, because the only thing that will end up raging is you, once you realize your bank account is overdrawn.

…dress for success! Wear clothes that are comfortable and thin (after all, if a hottie is going to be rubbing her lady parts all over your junk, you want to feel it), but also stylish. Sweatpants are out. Don’t look like a scrub.

…confuse fantasy with reality. These women are here to entertain you, but they are not your girlfriends and they, believe it or not, do not exist solely for your pleasure. Remember, it’s all about having fun. They’re not going to be your girlfriend, so don’t ask them out or wait for them in the parking lot after. If you see them at Denny’s the next day, don’t presume to know them nor treat them the same way you would in the club. Don’t fool yourself into believing that all strippers are insatiable nymphomaniacs with low standards who will sit on your face at the drop of a hat. Show some respect, both in and out of the club. Most importantly, KEEP YOUR HANDS TO YOURSELF!!!

… relax. If you’re new to this, don’t be shy or self-conscious. The dancers are neither your enemies nor potential mates, so no pressure. No one’s going to judge. Ogle away, pervert! That’s the whole point, after all.

…get hammered. Unlike other clubs/bars, strip joints are more a vehicle for entertainment than intoxication. A little drinkin’ here ‘n’ there is good to loosen you up and help you have a good time, but drinking more does not equate to having more fun. In fact, the relationship is usually just the opposite, and not just in the case of strip clubs. Get drunk and you’re more likely to make an ass of yourself. Besides, what’s the point of blowing a paycheck on lapdances if you can’t even remember ‘em the next day?

…give it a shot if you never have before. Who knows? You may even like it.