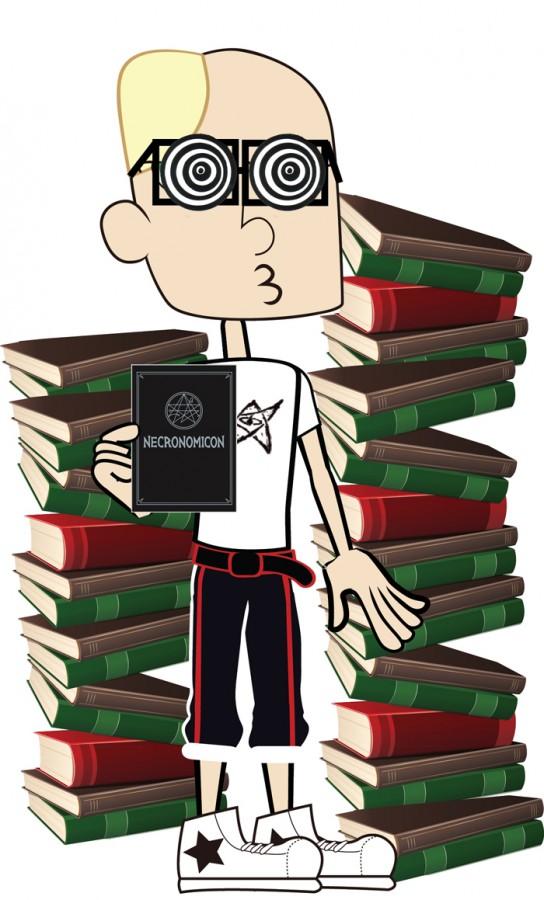 Every issue, the weirdos behind The Beacon’s Arts & Entertainment section indulge their vanity and give a thoroughly biased crash-course in whatever madness happens to be dwelling in their warped minds. Their views do not reflect those of The Beacon, its staff or Wilkes University. Blah blah blah. This week, Bill Thomas is asking if what you think you know about Cthulhu is…

Humanity is an exceedingly arrogant species. Wouldn’t you say?

We argue over the debate of science versus religion, but never consider that neither may be valid. In religion, or at least Western religion, we are told that God made us all in his image. A narcissistic notion, no? On the other hand, there’s science, which pretends to deal in fact-based objectivity. Except, science is not much different from religion, in a sense, in that it seeks to make sense of the universe in terms human beings can understand.

Therein lays the rub. Perhaps the universe is not defined by terms human being can understand. Is it really that outlandish an idea to believe that maybe there’s more to reality than what human beings can comprehend or imagine, more than what we can narrowly restrict to the five measly senses and three (or four, if you count time) dimensions which we are thus far capable of observing?

“The oldest and strongest emotion of mankind is fear, and the oldest and strongest kind of fear is fear of the unknown.” So opined horror author H.P. Lovecraft in his his essay “Supernatural Horror in Literature.” Considered one of the all-time greatest masters of the macabre in literary history, if Edgar Allan Poe is the charnel king then certainly Lovecraft is a putrescent prince.

You may know Lovecraft best by virtue of his most famous creation, the octopus-headed, bat-winged avatar of the apocalypse known as Cthulhu. All but ignored in his own time, Lovecraft’s star has steadily risen since his death in 1937, to the point where Cthulhu is a bona fide pop-culture icon. His slimy, tentacle-tongued mug can be seen plastered all over the Internet, where Lovecraft fan art and satirical memes are a common sight. He’s also appeared in major motion pictures, cable television shows, collectable card games and even children’s cartoons.

That said, if all you know about Cthulhu is that he’s an ancient evil god who hungers for souls and seeks to bring about the end of days, then you don’t know Lovecraft from Lovecrap.

The biggest misconception about Lovecraft’s manufactured mythology is that the entities in it, especially Cthulhu, are intentionally malevolent or that they specifically hate mankind. This interpretation oversimplifies Lovecraft’s work and subverts the central idea at the core of his philosophy of horror.

Calling Cthulhu and his kin “evil” suggests that their motivations are even fathomable to the human mind and, thus, able to be neatly labeled based on human morality. They’re more amoral than immortal. Calling them “gods” implies that they fit into an equally fathomable religious doctrine of some kind, one compatible with the binary, good-versus-evil, God-versus-Satan system so many of us put out faith in. “Transcendental, interdimensional entities” is a more apt description.

Worse, saying they specifically hate and want to destroy humanity suggests that humanity plays some kind of important role in the grander scheme of things.

That’s human arrogance in a nutshell right there.

The horror of Lovecraft is the horror of revelation. In Lovecraft stories like “Pickman’s Model” and “From Beyond,” protagonists are driven either to the very edge of sanity or hopelessly past it, by the unearthing of dark and terrible secrets. Often these secrets completely pervert said protagonists’ firmly held beliefs as to the true nature of reality itself. In the tales of Cthulhu and his fellow non-evil non-gods, the biggest revelation is most often the utter impotence and irrelevance of humanity as a whole.

The universe, Lovecraft tells us, is broader, deeper and more layered than human beings could ever hope to understand. Cthulhu doesn’t want to kill us all because he hates us. He’ll kill us all if he can, don’t you worry about that. But he’ll do it because he is indifferent to us, because we simply do not matter. To him, we are have no more significance in the face of reality than a microscopic mote of dust on the back of ant does to us when it’s under the heel of one’s boot.

Though author H.P. Lovecraft is most often spoken about in association with his “Cthulhu Mythos” stories, the fact is he was a prolific master of the macabre of whose overall body of work Cthulhu and his ilk comprise but a small (albeit widely adored) segment. These are…

Imprisoned with the Pharaohs

This one barely makes the list, as Lovecraft ghostwrote it for another famous face from the early 1900s, escape artist Harry Houdini. That combination alone, however, merits this tale’s inclusion, if only out of geeky, fanboy appreciation of the pulpy novelty of it. Purporting to be true, the story casts Houdini as the hero in a tale of ageless, inhuman horror among the pyramids of Egypt.

The Picture in the House

One of Lovecraft’s most simple, understated stories, “The Picture in the House” this slow-burn, abruptly ending mood-piece about the potential rejuvenating effects of cannibalism slowy ramps up the overtones of menace and dread until a sudden, unexpected finale.

Among Lovecraft’s most notable pet themes are those of genetic corruption and ancestral secrets. All are on full display in this tale, wherein the title character discovers he may be descendants of decidedly less-than-human stock.

Arguably Lovecraft’s best-known work, the author originally intended the piece – adapted into the 1985 splatter movie classic “Re-Animator” –  to be a parody of Mary Shelley’s “Frankenstein.” Sly, wry humor aside, the story is nevertheless is ghastly as they come. It’s also one of the first times the idea of zombies being raised via science, rather than voodoo, was explored. Show some respect.

Greatly inspired by British author William Hope Hodgson’s novel “The House on the Borderland,” as well as Lovecraft’s own aforementioned fascination with the degradation of family bloodlines, “The Lurking Fear” is a companion piece to the more Mythos-y “The Rats in the Walls.” Both literally “dig up” buried secrets and leave their protagonists shaken to their core.

The Colour Out of Space

The most borderline Mythos-y story on this list, this tale is also one of Lovecraft’s own personal favorites. How can you argue with that? In it, the idea of humanity’s own limited understanding of the universe is explored when meteorite crashes to Earth and brings something deadly and wholly incomprehensible with it.

What would you do to live forever? Lovecraft revisits themes from “Herbert West – Reanimator” and “The Picture in the House” in this tragic and chilling (literally) story, which indulges the author’s interest in scientific advancement while communicating the inherent horror of immortality.

This time, Lovecraft turns his exploratory eye on himself and the art of manufacturing fear. In “Pickman’s Model,” we meet Richard Upton Pickman, a painter notorious for creating hauntingly real portraits of hideous creatures that couldn’t possibly exist. Could they?

Though Lovecraft is known for his use of shocking twist endings, this one takes the cake. A multi-layered masterpiece of reader manipulation, “The Outsider” concerns a mysterious prisoner trapped in a tomb, who discovers something that is liberating for him, but terrifying for readers. Saying anything more would be giving too much away.