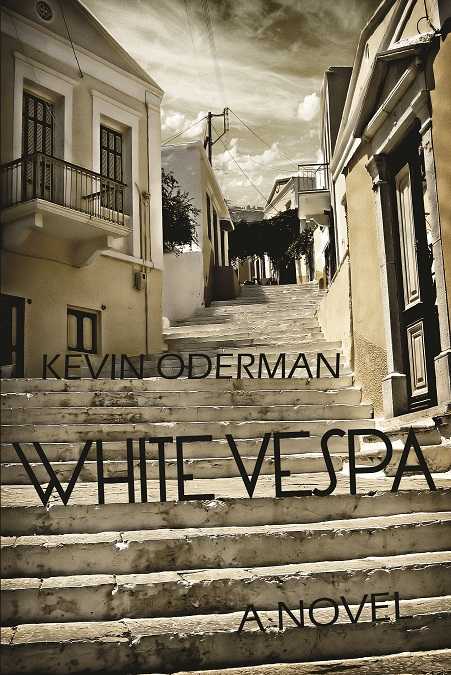 While working on his latest book, “White Vespa,” one specific memory stood out in the mind of author Kevin Oderman and helped shape one its central conflicts.

“When I was just a young person, there was a very handsome fellow in my circle of acquaintances who was kind of a sociopath,” Oderman recalled. “I saw him trip a little kid in a store once, so that the kid fell face-first right into the linoleum. The kid’s mother got after the kid for causing a scene and this boy that I knew, who tripped the kid, he was laughing about it. He was very pleased with himself.”

Oderman, who is also one of the faculty members for Wilkes University’s graduate Creative Writing program, said that the described incident not only stayed with him ever since, but also spurred the creation of “White Vespa.”

The book, which comes out this week courtesy of on-campus publishing house Etruscan Press, tells the story of several American expatriates living on the Greek island of Symi, among them Myles, a photographer trying to work through the trauma of a lost child and failed marriage, and Anne, a barmaid whose bad blood with her brother, Paul, is coming to a boil.

It is the latter tale of sibling strife that Oderman said has its roots in the memories of the “kind of” sociopath he knew in his youth.

“I could never get that out of my head,” Oderman said. “That kind of person, what makes them tick? How do you deal with them if it’s somebody you know, particularly if it’s somebody in your family?”

In trying to answer those questions, the author had to tap into his own dark side.

“I had to some of what I call ‘couch work,’ which is the best part of writing where you just lie around on your back and imagine,”Oderman said. “If you’re writing, you have to have some part of you – in this case, I hope a very small part – that can identify with any one of your characters and find similar impulses in yourself, even if they’re not necessarily acted-upon impulses. I had to understand this character from the inside. I had to identify with him, even though he is a bad guy.”

Long-held memories and deep-seated impulses aren’t all Oderman drew upon while writing “White Vespa,” though. No stranger to the expat lifestyle, he has spent time living in Greece himself, as well as Asia and the Middle East, among other places.

For “White Vespa,” Oderman didn’t set the action in Symi simply because of its exoticism or beauty (though he opines that it has plenty of both). More than that, he explained, the ancient, crumbling state of Symi’s Neoclassical architecture reflects the lives of the novel’s damaged protagonists.

“I’m using (Symi) for its metaphorical resonance. I guess you could say it’s a little bit like a character, but it’s more that, in a way, it externalizes what would otherwise just be internal states in the characters,” he said.

“Many, many of the buildings are in a somewhat falling-down state. I like that feeling of transience, where we walk around and look at buildings and it seems like they’ve always been that way, but of course everything is falling down sooner or later.”