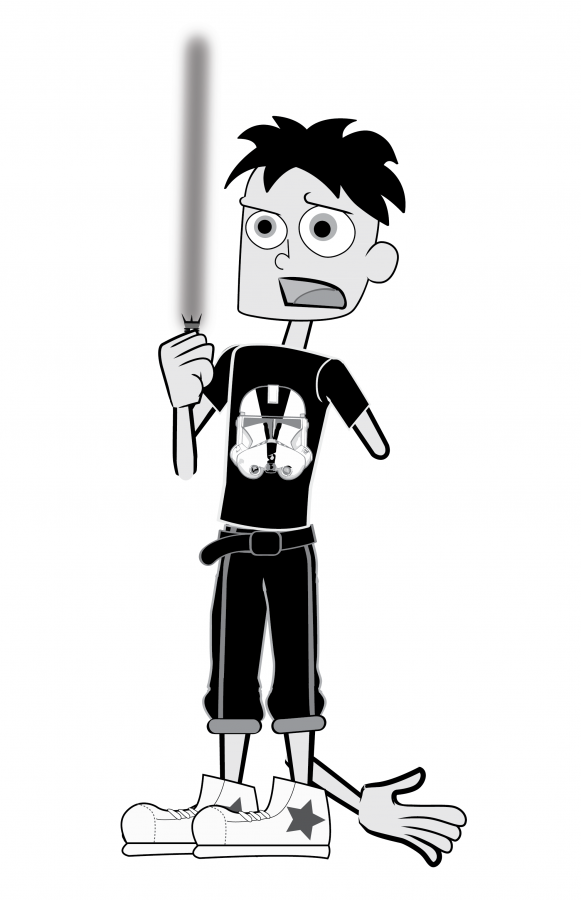 Every issue, A&E Editor Bill Thomas and Assistant A&E Editor Jake Cochran indulge their vanity and give a thoroughly biased crash-course in whatever madness happens to be dwelling in their warped minds. Their views do not reflect those of The Beacon, its staff or Wilkes University. Blah blah blah. This week, Jake Cochran is boosting his midichlorian count in…

A Galaxy Far, Far Away

Every group or fan base has its own little nuances and things that are accepted, cherished or even worshiped. However, “Star Wars” is one of those things that just goes above and beyond most, its fans rivaling even the Kiss Army in their devotion to something that seems trivial to most outsiders.

At almost every comic book convention, film convention or other large gathering of those of the more nerdy persuasion there will without a doubt be some variation of a Stormtrooper and/or Darth Vader. Even Mickey Mouse has gotten in on the act, with no less iconic and all-American an institution than Walt Disney Co. recently indoctrinating tales of “a long time ago in a galaxy far, far away” into its entertainment empire. This is something that can be counted on almost as definite as the sun rising, but the question is why? Why “Star Wars”?

It could be that the series has spanned generations of nerd-dom: Father nerds that somehow managed to bring little nerds into the world, raised these little nerds to love “Star Wars.” Those little nerds got brought up playing with ancient relics like Luke Skywalker’s original X-Wing and reenacting battles between “Ben” Kenobi and Darth Vader, and the father finally being able to assert his fatherhood over the child in an all-too-cliché fashion.

But that old, almost legendary phrase uttered deep inside the bowels of Cloud City never did stop echoing. It has been used in so much more than a “Star Wars” context, and has never stopped being relevant. If someone says “Lukkkkkke, I am yourrrrr faathurrr” into an old desktop fan, everyone will get the reference. Even if the actual line is “No, I am your father.” You get the point.

But what is even more amazing about the series is the way that it refuses to stop reinventing itself, somewhat to the disdain of some fans. It will constantly be updated with “better” special effects and sound. It has been a constant work-in-progress with the addition of completely new scenes on practically every re-release.

While these new scenes are not always welcome additions by the hardcore fans, they eventually learn to embrace them, although some things like the case of the Mos Eisley Cantina and whether Greedo or Han shot first give new life to the series and keep the series only a page or two away from the front of most Internet discussion message boards.

Furthemore, the expanded universe is literally always expanding, with graphic novels and the animated TV series “The Clone Wars” continuing to bring the series to new generations. To keep up with all the material out there for the series would be an incredible task, and this is why it the franchise receives so much enthusiasm from its fans.

If someone is baffled by a character like a Boba Fett or even an old Jedi like Kit Fisto, just going online and typing in their name in a Google search reveals page after page after page of results. Whether in the form of licensed books or fan fiction or even just aimless speculation, there is a wealth of material out there.

The casual fan may be thinking, “Well, big deal.” What some people don’t realize is, for example, in the three original movies Boba Fett appears in, he’s probably on screen for a total of, like, an hour. Tops. He barely makes any real impact. Nevertheless, people will spend upward of $500 to get the full Mandalorian Battle Armor suit so they can look just like him.

That fact alone shows how devoted “Star Wars” fans are and, honestly, after sitting for a long time thinking this over, it seems the reason cannot be pinned down to one exact thing. However, the fact that the series is so expansive and inclusive that any part of the series can be important definitely helps.

More important is that the series has constantly reinvented itself. Most recently, with the advent of extremely customizable and interactive video games like “Star Wars: The Old Republic” and “Star Wars: The Force Unleashed,” the fans feel they are making an impact on the series for years to come by creating new characters. Every new generation of fans feels like they are the most important generation of fans.

As the “Star Wars” franchise continues to grow and evolve, it seems that will eternally be proven true.

This is a list of characters that appear on screen with minimal screen time, or in just one movie, but somehow they have managed to become marquee characters in the series for one reason or another. It shows how expansive the “Star Wars” universe is and how even the smallest elements of it can become integral parts of an ever-evolving mythos.

Often replicated but never duplicated. Except once, literally. Jango Fett is the “father” of Boba Fett. And by “father” I mean “host.” Boba is an exact clone of Jango Fett. Jango is also one of the most feared bounty hunters in the universe and he himself is alone the basis from which all Clone Troopers and Stormtroopers were clone. So, while Jango isn’t the most important cat on the block, he literally was the muse for an entire army. After a little gene manipulation, that is.

Just like his “father,” Boba was a notorious bounty hunter but has been in literally three times the amount of movies his father has been in. In other words, three movies. Just three. Despite this, he has become hugely popular. We first see this future serial killer on Kamino as a little boy and it’s easy to notice his training has already started. But when he truly comes to fruition is when he brings Han Solo to Jabba the Hutt to a pay a mob debt.

Some may ask “How is Darth Maul. the main antagonist of Episode I, a minimal character?” How ‘bout this: He’s only in one movie and says about a paragraph of dialogue. So, shut up. Maul has taken the tribal tattoo to a new pinnacle as it was the advent of that particular style of ink when Episode I was released in 1999. I wonder if Maul was created today, would he be covered in anchors and sparrows?

Greedo was never that big a deal up until one day when George Lucas randomly decided that Han Solo should be acting in self-defense when he killed the otherwise insignificant alien, rather than being a general badass. This made millions of nerds learn his name to defend the fact that he was supposed to be a “victim” of the scruffy nerf herder, making him a more hotly debated topic than Roe v. Wade.

Jabba is consistent with his appearances through the franchise but, honestly, he isn’t exactly that important until “Return of the Jedi,” wherein Jabba only becomes a main character for a brief 30 minutes before croaking. While he becomes a perfectly hatable villian in that time he creates something else the “Star Wars” fan base cherishes: Gold-bikini slave Leia. Thanks, Jabba.

These lovable teddy bears are as cute as they are deadly. In fact, these furry fellas are apparently the reason the empire supposedly crumbles. Apparently, the whole galaxy’s fate was to be decided on an unimportant moon of Endor.

This is the opposite of a beloved character. Rarely has any character been met with such hate and disdain. Jar Jar is beyond the pin cushion for the series; he is the bane of the series’ existence, and this writer thinks wrongfully so. Let the hate mail begin.