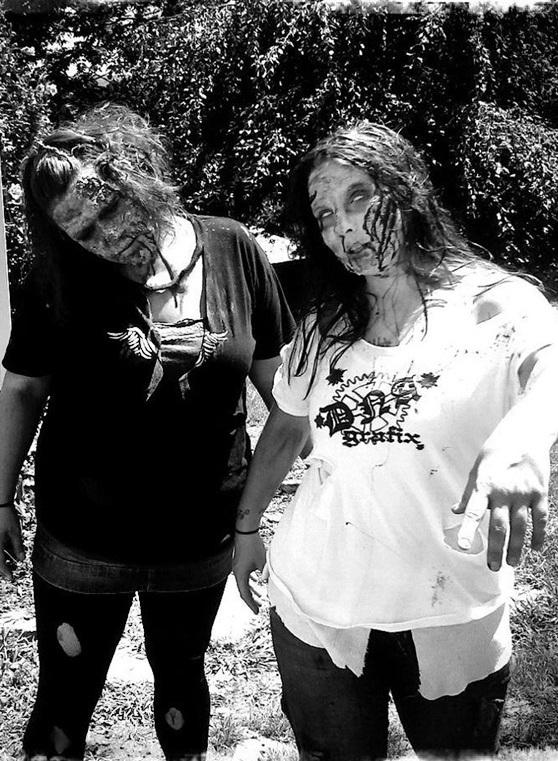 A mass of 80 or more zombies hobbled across a nearly deserted snowy park. Then, for some unseen reason, they all changed direction at once. Now making their way across a bridge, they came to the end, then to a complete stop.

The zombies were waiting for the crosswalk signal.

They weren’t actually a horde of real zombies, of course. Just a horde of zombie enthusiasts, dressed up to participate in the 2011 Wilkes-Barre Zombie Walk.

Jessica Lindgrin, the event coordinator and zombie wrangler for this year’s event, remembers her own experiences at last year’s walk. Back then, Lindgrin wasn’t an organizer. She was just another participant.

“It was frigid cold, it was freezing,” she said. “There was myself and five other friends and we were on and off: ‘Do you wanna go?’ ‘Yeah. No. Yeah. No. Yeah.’ And finally we just threw make-up on and went and it was a lot of fun. The running joke between everyone was that zombies don’t get cold.”

Around 1 p.m. on Saturday, Oct. 27, shamblers will gather once more in Kirby Park before shambling along their usual root: From there, crossing the Market Street Bridge, then looping around the Wilkes-Barre Square before returning to Kirby Park again. New to this year’s event, though, is a mission to bring awareness to a cause that is not just apocalypse preparedness.

Lindgrin, the primary organizer of the event this year, wants the focus to be about helping give back to the children of surrounding communities, through the addition of a Toys for Tots bin at the start of the walk in Kirby Park.

“I talked to the guy from (the Wyoming Valley Detachment Marine Corps League, which oversee the local branch of Toys for Tots) and he will be there with the bin and I joke with him about ‘Are you going to come dressed as a zombie?’ and he kind of just laughed back that he will have to see what’s going on,” she said.

“Maybe the Marine will be dressed as a zombie, maybe not, we’ll just have to see,” Lindgrin joked. “I’m thinking probably not because he won’t look professional.”

With the focus on children this year Lindgrin, a special effects make-up aficionado, made it clear that the walk should be a family oriented event and that they are really trying to do some good with the Toys for Tots foundation.

While the recent economic recession is technically over, the effects of it are still being felt. Lindgrin cites this as one reason why the Wilkes-Barre Zombie Walk wanted to partner with Toys for Tots this year. The idea is that, since times are tough, the need to start the drive as soon is prominent. With Christmas on the way, Lindgrin said, it’s never too early.

So, while it sounds like the terrible plot line of a Z-grade bootleg horror movie, zombies are in fact teaming up with the Marines to save Christmas. Just because zombies crave brains, that doesn’t mean they don’t already have hearts.

In addition to the Toys for Tots bin, the Kirby Park starting point will also have a few trained professionals and enthusiastic hobbyists to help would-be zombies add some bite to their ensembles. The artists will be working with some latex based make-ups to add bite wounds and tear-away flesh chunks, as well as the obligatory splatters of blood.

While the artists will be doing their work free of charge, Lindgrin encourages any endorsers to be a good sport and put a little something in the tip jars they leave out, noting that the cost of the make-up is not cheap.

When asked about what type of zombies she expected from her experience last year she had a wide range of predictions. Last year she saw everything from Gothed-up ghouls to Mohawk-headed crust-punk flesh-eaters. She also noted a group of zombified nurses as well as a group of what she referred to as “green slime zombies.”

“I want to see creativity, people always say that this area has nothing to offer and I think this is a great opportunity to showcase our creativity.”