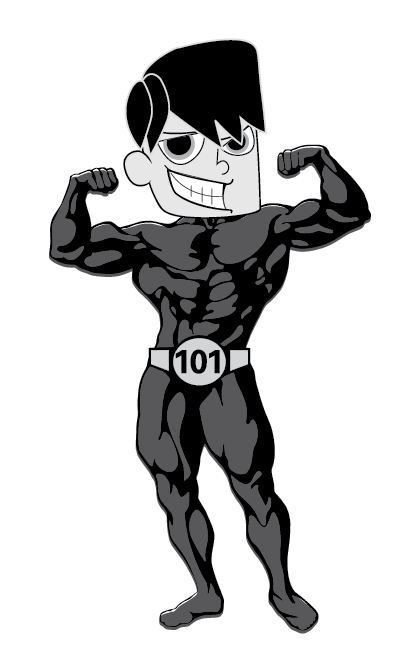 Every issue, A&E Editor Bill Thomas and Assistant A&E Editor Jake Cochran indulge their vanity and give a thoroughly biased crash-course in whatever madness happens to be dwelling in their warped minds. Their views do not reflect those of The Beacon, its staff or Wilkes University. Blah blah blah. This week, Bill Thomas is laying the smackdown with some…

There is a belief held by some, including yours truly, that comic books and professional wrestling are the two closest things modern society has to traditional mythology. Last week, The 101 took a guided tour through the world of comics, so this week we’re going to step inside the squared circle to analyze this thing called affectionately by some “rasslin’.”

Looked down on by pseudo-intellectual elitists who consider such things “low brow,” pro wrestling nevertheless provides a ritualized, streamlined outlet for both emotional catharsis and the symbolic expression of timeless values via elemental iconography.

Really, is there any truly significant difference between Hades, Batman and The Undertaker?

Of course, all these over-the-top personalities are locked in perpetual combat with one other on an ever-shifting battlefield, one wherein the more things change, the more they stay the same. The costumes may be oh-so-colorful, but good and evil are often as clear-cut as black and white.

Just like there will always be kids who dream of flying the skies like Superman, there will similarly be those who fantasize about filling the boots of “The Nature Boy” Ric Flair, Bret “The Hitman” Hart, “Stone Cold” Steve Austin or “The Best in the World” C.M. Punk.

Put on pedestals as emblems of rugged individualism – not, as some would contend, archaic misogynist masculinity – figures like these become more than merely men in tights. They become representations of undisputed human ideals like chivalry, tenacity, nonconformity and self-actualization.

Their ceaseless warring mirrors that of the gods of old, as well as the conflicts, both external and internal, that every person on Earth engages in daily.

Some will laugh and snidely quip that “it’s all fake.” However, what such detractors fail to realize is that most fans, save for those with the mental capacities of children – not all of them actually are children – already know that.

Still, you wouldn’t call ballet fake, would you? What about opera?

Therein shines the elevating beauty of pro wrestling. Despite some superficial similarities, it’s completely unlike boxing or mixed martial-arts, both of which could arguably be fingered as legitimate examples of contemporary barbarism, along with hunting, fishing and capital punishment.

See, pro wrestling is all about cooperation instead of competition. Consider pro wrestling matches to be “exhibitions,” if that helps. Does that make them any less athletic? Any less demanding of skill, strength, speed, stamina and timing?

The bloody feuds that play out in wrestling rings are fictions. But the blood itself, left smeared across foreheads and turnbuckles? That’s real. The elaborate and carefully orchestrated body slams may not deal as much damage as we’re led to believe, but there is damage done nonetheless.

Being thrown to the ground hurts, regardless of who does the throwing. Injuries happen. A lot.

Why, then, would someone put themselves through such rigorous physical conditioning only to turn around and put his or her body on the line for something so many snobs will continue to derisively denounce as “fake”?

For some, it’s passion. For others, it’s business. Or a hunger for fame, a need for attention. In the end, though, it all comes down to two simple things: Telling a story and entertaining the crowd.

As much as it may or may not be a “sport,” pro wrestling is infinitely more than that. It’s a form of art. It is theater and it is drama. Tragedy and comedy. A carnival, a circus, a sideshow. It’s a hustle, a dance and, yes, even a soap opera.

Pro wrestling is mythology. It’s folklore made flesh. It’s all these things smashed together, distilled to their purest essences, then injected full of testosterone, with the pageantry and spectacle turned all the way up to 11.

Pro wrestling, like any art form, has its own culture and language uniquely its own. Want to understand what the heck all the fans are talking about when they say things like “kayfabe” and “vanilla midget”? Maybe this unofficial Smark’s Pocket Dictionary will come in handy…

The fictional canon of a wrestling company and its wrestlers. Also used to describe the obsolete rule that a wrestler should always uphold that canon in public. (see “work” and “angle” below)

An action, event or series of events with a fictional basis. Done to uphold kayfabe and enhance an “angle.” (see below)

The opposite of a work. Something real and unscripted. Often a speech or interview, but can apply to in-match occurrences as well, such as strikes that actually connect. Implies conscious intent.

A wrestling storyline, usually a feud between two wrestlers or two factions of allied wrestlers.

A wrestler’s in-ring persona or signature shtick. The extra flavoring that makes him more than just a guy in his underpants pretending to fight. Examples: The Undertaker is undead. Brodus Clay is a fun-loving rapper who never raps. Andre the Giant was f***ing huge.

Short for “babyface.” A “good guy” wrestler.  The hero in a given angle.

A “bad guy” wrestler. The villain in a given angle.

Neither a face nor a heel. Something in between. Shades of gray. Often difficult to pull off.

When a face becomes a heel, or vice versa. Necessary due to audience fatigue with familiar gimmicks and played-out angles. A turn usually kicks off in a sudden plot-twist type moment. More rarely, a “slow burn” turn can happen gradually over a long period of time. Even rarer is the “double turn,” in which both a heel and a face turn over the course of the same match.

A sudden plot-twist moment like the one mentioned above. Used predominantly, but not exclusively, for turns.

When a wrestler is getting exactly the kind of reaction he hopes to get. Whether the wrestler is a face or heel, being over requires the audience to love or hate said wrestler enough that it regularly garners an impassioned reaction.

To lose a match, usually to put another wrestler over.

A wrestler either too new or uncharismatic to get over. Continually loses matches a way of getting others over. In other words, cannon fodder.

A deliberately one-sided match that exists solely to get a wrestler over. Usually employing a jobber.

A wrestler who is so bland and/or small in stature that he or she is unlikely to ever get over.

When one wrestler reacts to another wrestler’s offense in an attempt to make said offense appear real. Dolph Ziggler is the king of this.

When a wrestler doesn’t pull his or her punches. Nor chops. Nor kicks. Nor anything else.

A face full of blood.

The act of using a concealed razor to intentionally draw blood for the sake of adding an extra dimension of violence or gritty realism to a match. Usually done by oneself.

The act of drawing blood without the use of a concealed object. Often unintentional. Sometimes done on purpose using a technique by which one wrestler punches another at a precise angle so that the puncher’s knuckles split the punchee’s eyebrow.

A wrestling fan who actually believes what he or she is seeing is 100 percent real. A dying breed, composed primarily of young kids, stubborn die-hards or the exceptionally dense.

An industry insider who knows how the business works, knows that matches aren’t truly competitive, that their outcomes are in fact predetermined and that most wrestlers’ personas are at the least exaggerations of their actual personalities, at the most complete fabrications.

Half-smart, half-mark. A smark is a wrestling fan who knows the same things a smart knows, but isn’t an insider and is, in actuality, just as much a fan as a mark. Smarks enjoy wrestling for its athletic and artistic qualities, regardless of the illegitimacy of its appearance as competitive sport. Example: Me.