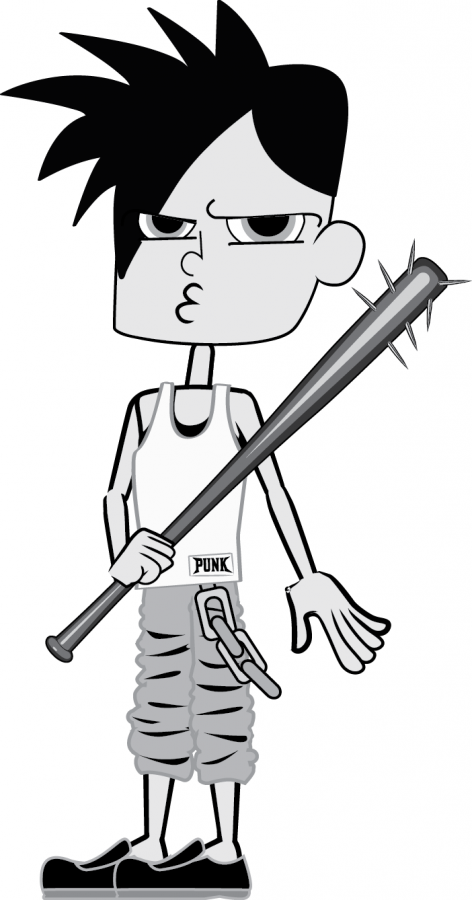 Every issue, A&E Editor Bill Thomas and Assistant A&E Editor Jake Cochran indulge their vanity and give a thoroughly biased crash-course in whatever madness happens to be dwelling in their warped minds. Their views do not reflect those of The Beacon, its staff or Wilkes University. Blah blah blah. This week, Jake Cochran is triumphantly declaring…

It’s a term that gets thrown around too often, and it’s typically not something people give much thought to. The idea that “punk is dead” has existed for just about as long as the idea of punk itself.

Let’s get this out of the way first, punk’s not dead, just because we have three dead Ramones, a Joe Strummer who’s pushing up daisies and a Sid Vicious who’s been in the ground for decades, that does not mean the genre died with them. Contrary to what some people would have you believe, there is a very well-established core of veterans keeping punk rock on life support. Actually, it might just be as healthy as ever.

Having that die-hard core has made 2012 an amazing year for the genre. Hell, even this past week was a great, with two new albums dropping on the same day, one from NOFX and one from The Adicts. On top of that, this year also marked the 40-year anniversary for the British genre royalty of Cock Sparrer and the 20-year anniversary of the snotty Californians in Rancid.

Earlier in the year, all four bands teamed up for a handful of shows on the West Coast, to commemorate the anniversaries of their formations and promote their albums respectively. When the bands came to the East Coast, however, the bands each went their separate ways, launching their own tours and putting on show after show at packed venues all over.

Celebrating 40 years as a band, Cock Sparrer went on tour and played shows all across the globe. During this tour the group visited Philadelphia for the first time in its generation-bridging career. In this writer’s estimation, the band put on an absolutely flawless performance.

Before the show, fans standing in line were cracking jokes that frontman Colin McFaull would need to have his microphone attached to a walker, but once the show was finished they had the respect of everyone in the sold-out venue. Proving even further that age hadn’t tamed Cock Sparrer’s youthful punk-rock spirit, the end of the show was not even close to the end of music. The band played the same venue again the next day. Once again, the show sold out almost instantly.

Rancid started its tour for its 20-year anniversary as a way of jump-starting the creative spark it will need when the band members head back into the studio to record their first album since 2009. According to founding member Tim Armstrong, the band is looking at an early spring 2013 release, if everything goes as planned.

Armstrong is expected to have a busy next few months, as it’s also been rumored that he will be going back to the studio with partners-in-crime Skinhead Rob and Travis Barker of Blink 182 for a new Transplants album. That would be the group’s first album since 2005. The punk-rock supergroup has already teased fans with a sporadic series of shows featuring a new song, “In a Warzone.”

Speaking of album releases, just last Tuesday The Adicts released their newest album, “All the Young Droogs.” Sticking to the group’s roots, “All the Young Droogs” serves up 12 cuts of overly theatrical party music with lighthearted lyrics and sing-a-long hooks. The members of The Adicts are also touring across North and South America to celebrate this release and, if you’ve never seen The Adicts live, you should reconsider your life choices.

Not alone in releasing new material, NOFX put out an album on Tuesday, Sept. 11, the same day as The Adicts. Called “Self Entitled,” the new release is one of the faster albums NOFX has put out to date, but it sticks to the group’s trademark tongue-in-cheek make-fun-of-everything style, truly showings that punk is nowhere near dead.

To read more about the above-mentioned albums and tours, as well as other random “war stories,” keep your eyes peeled for future online exclusive right here at TheWilkesBeacon.com.

Since punk’s not dead, you’re not going see any obituaries here. Instead, check out these “nobituaries” celebrating the lives of the icons of punk who are still very much alive.

Tim Armstrong
When people think punk, they think mohawks, spiky clothes and angry music. Enter Tim Armstrong. While Armstrong has traded in his “Liberty Spikes” hairdo for a wicked skull tattoo, he is still as energetic as ever and has seen success in a variety of his side project as well as one of the founding members of Rancid, of course.

Jello Biafra
Of the many people who have run for mayor in San Francisco or for President of the United States for the Green Party, one can safely assume that only one candidate has ever snarled the lyrics to songs like “I Kill Children” and “Nazi Punks F*** Off.” That would be Jello Biafra, former frontman of California hardcore act Dead Kennedys. Still one of the most outspoken and well-spoken members in all of the entertainment industry, Biafro has no problem saying what’s wrong  with the world and how to fix it.

STZA Crack
“STZA” is not his Christian name but, it’s what he’s best known as. What he does best though is hate all authority figures and play songs with a strong ska influence. He’s associated with many acts, but is mostly known for the bands Leftover Crack and Choking Victim

Lars Fredericksen
Some people would be content with having been on MTV at some point during the ‘90s, but not Lars Fredericksen. Like fellow Rancid member Tim Armstrong, Fredericksen has started a few side projects over the years and been associated with even more. More recently, he produced Cock Sparrer’s 2007 album, “Here We Stand.” This guy’s got his hand in damn near every pot in today’s punk scene.

Matt Freeman
Some people are good at their trade. Some are legendary. Then there’s Matt Freeman of Rancid. At one point in time, Freeman was so good at standard bass that, for his side project (everyone needs one), he decided to switch to stand-up bass and form a psychobilly act called the Devil’s Brigade.

Jerry Only
Some people would say horror-punk group The Misfits ended once mastermind Glenn Danzig left. Those people would be idiots. Jerry Only is the longest running member of The Misfits. only missed out on official “original member” status by a scant few months. And while that isn’t actually the most prestigious title, you need to give him credit for inventing the Devilock, horror-punk’s signature hairstyle.

Iggy Pop
To borrow a term from Brazilian MMA phenom Vitor Belfort, Iggy Pop is what could only be referred to as a “Young Dinosaur.” Simply put, Pop is straight out of Cretaceous Era of punk-rock music.  Best known for ingesting mountains of drugs and alcohol as lead singer for The Stooges in the late ‘60s and ‘70s, its miracle this guy is still alive.

Keith Warren
The members of The Adicts are known for the ridiculous carnival atmosphere of their live shows show. The ringleader of that carnival is Keith Warren, aka “Monkey.” Sporting outrageous outfits that would make Liberace blush and dancing with the frenetic energy of a man half his age, Warren is the personification of all things Adicts.