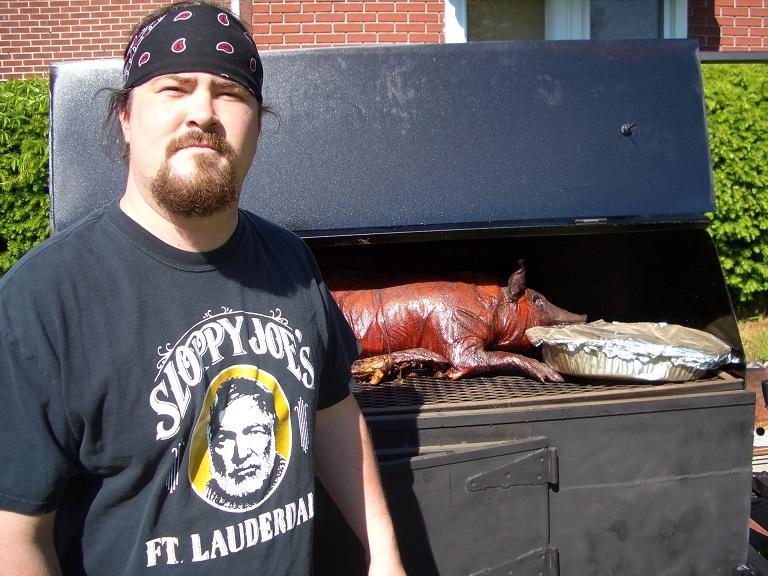 For NEPA-based filmmaker Mitch Csanadi, it’s all about the characters. The more unique, colorful or over-the-top, the better.

Since founding Dirt Productions in 2005 alongside producer Dan Maher, Csanadi has written and directed a number of short horror films and one feature. All have been lensed in NEPA, throughout the Lehigh Valley, and all have had showcased their fair share of oddball personalities.

The characters that have captured Csanadi’s imagination as of late, however, have not been works of fiction.

“Everything from a gnarly 85-year-old dude in a wheelchair who orders his wife around while she’s cooking all this barbecue at a competition to a team of really hot young blonde girls from Long Island who do it and win,” Csanadi said, describing some of the personalities that have inspired his latest project: a feature-length documentary about competitive barbecue called “American Smoke.”

“There are so many interesting characters out there. It really writes itself. I was like ‘We have to capture this. This is a chunk of America. We’ve got to get this scene.’ It’s a scene I never even knew existed four years ago.”

Four years ago. That’s when Csanadi got bit by the barbecue bug and began competing. He is now part of two teams, Zombie Barbecue and Smokerhead Barbecue, which make the rounds in the East Coast competition circuit.

The other bug that bit Csanadi, the one that bit the hardest and whose grip has held the longest, is the filmmaking bug. Talking about his adolescence, Csanadi describes himself growing up as “just a little punk, renting a VHS camcorder from West Coast Video down the street and shooting backyard horror movies.”

Hold down the fast-forward button. Csanadi, now 30, has plied his passion on a seemingly endless number of short films – including award-winners “Nothingface” and “The Dead” – as well as a music video for Allentown-based hip-hop act Fat Cat Daddies. The filmmaker’s first feature-length project, the raunchy ‘80s-inspired comedy “Nacho Mountain” was recently picked up by Chemical Burn Entertainment for national video-on-demand DVD distribution this summer.

With all that under his belt, “American Smoke” marks Csanadi’s first adventure into documentary territory.

“As a filmmaker, I never want to get lumped in with any one category. I love the excitement and I love the challenge of doing some completely different,” Csanadi said. “We’ve never done something like this, but the material is so damn interesting to us. Also, it’s unique. It’s something we really haven’t seen. Yeah, there’s been TV shows like “BBQ Pitmasters” and little things here and there, but there’s really a huge underground world of barbecue competitions that’s never really been explored in-depth.”

Csanadi plans to venture beyond the East Coast competition circuit to get a fuller picture of the barbecue lifestyle. To do that, he is currently raising funds for “American Smoke” on Kickstarter.com.

Accepting donations until Sunday, March 11, the project has received $1,190 of its $2,500 goal as of press time. For more information, visit dirtproductions.com or kickstarter.com/projects/39697346/american-smoke.

Torment from Mitch Csanadi on Vimeo.