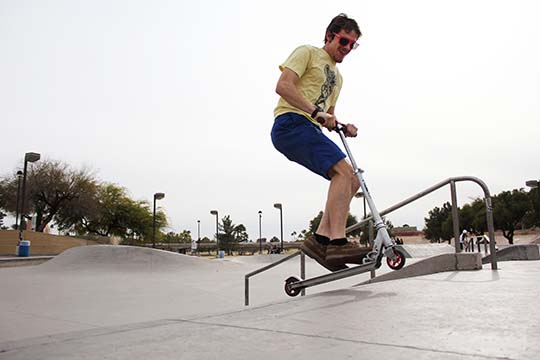 As Wilkes University’s resident crazy scooterer, it’s only logical that I would bring my Razor scooter with me to Mesa.

Well as it turns out, I’ve gotten much more use out of it than I expected. The first day we were there, Doug bought rollerblades; everyone laughed at him. That is until they realized I brought my scooter; now they laughed at both of us.

With Mesa being so flat, each one of us ended up getting our own “skate-equipped” device. We looked like a mismatched, overgrown version of the ‘90s cartoon, “Rocket Power.” I’m sure shouting cliché ‘90s words while riding didn’t help my case.

After a week of riding, we were basically pros. So logically, we decided to go to the skate park. Aside from being three to seven years older than everyone there, we were also terrible. Of course, that didn’t keep us from trying.

Doug fell the hardest, as he tried to get the most air. I was challenged to a game of “Scoot,” though I’m not entirely sure what that entails. Sara casually watched from the side. We all escaped without any broken bones; the only thing injured our pride. Well, Doug’s hands were pretty bad too.

Now Joe, Brandon, and Ryan have long boards; Poe has a scooter; and we all have a few bruises. Skate park runs are becoming more common. Going to school is more fun; there is some strange satisfaction in filling the corner of the room with skateboards, scooters and rollerblades when we go to class. Who knew being so childish could be so much fun.