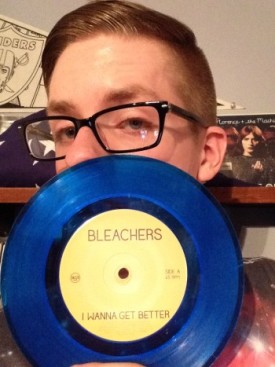 I was going to start off by mentioning my favorite new songs of the week, but let me address something that I find extremely disturbing. Director Jeff Osborne might just be the most hated person in the music industry right now…and probably on Twitter.

If you haven’t heard about Nicki Minaj’s new lyric video for her third single “Only”, then go watch it now because it will probably be taken down soon. At least I hope it will. What the bleep was going through his mind when making that? You can’t possibly tell me there isn’t even the slightest bit of anti-Semitic imagery in that because there’s a lot of it. Sure, the director is going to make up some bizarre story about how it’s “art”, but are we really going to fall for it?

You know what is almost equally disturbing as this Nazi themed video? The lyrics to this song which also features Drake, Lil Wayne, and Chris Brown. I’m absolutely floored by the degrading lyrics and utter trash being spit out by these so called “artists.” I’m not going to dive in to the whole pro-feminist issue (which I do support by the way), but women like Nicki Minaj aren’t really helping matters.

Referring to women as “bit*^es” and “hoes” is a huge setback. It’s almost as bad as when male rappers say that crap in their “music.” What does this show younger generations who unfortunately look up to these rappers as models? I’m sorry but this just really irks me, and I realize it’s not just in rap music, but it’s very predominant in that genre. Let’s take the following lyrics from Drake’s part in the song for example: “I never f-ed Nicki, cause she got a man, but when that’s over, then I’m first in line/and the other day in her Maybach, I thought god damn, this is the perfect time.”

Seriously?! This is what she wants to exploit her fans to? Same thing goes for Drake. Is this what young boys are being exposed to? I can’t believe the message this song is sending. This is why many men growing up have such a bad attitude toward woman assuming they need to be their sexual object. Lyrics like those do not help the young minds in this country. I’m sorry I sound like an old person, but let’s be freaking real here shall we?

Anyway, some new music I really like right now comes from Robert DeLong’s new EP titled Long Way Down. It features four new songs with a very electronic vibe including the new single “Long Way Down.” I’ve been anticipating something new since his best know single “Global Concepts” was released in 2012. Indie folk band The Decemberists from Portland have released a new single “Make You Better” which will be included on their forthcoming seventh studio album What a Terrible World, What a Beautiful World. The new album will be released on January 20th, 2015.

Twenty-one-year old British folk and blues singer George Ezra just released a video for his song “Listen to the Man” which features British actor Sir Ian McKellan. The single is featured on his debut album Wanted on Voyage. It’s important to mention George’s song “Budapest” is gaining steam here in the U.S. as it has so far reached #4 on the Adult Alternative Songs chart and #39 on the US Rock Airplay chart. It’s about time since the song has gone Top 40 in many countries and actually reaching the top 10.

Lastly, my new obsession is the song “Cecilia and the Satellite” by Andrew McMahon in the Wilderness. Andrew was the pianist and vocalist for Something Corporate and Jack’s Mannequin. His solo album was released last month to favorable reviews. Also, let’s take a moment and watch this viral video starring me that’s sweeping the nation and Wilkes campus (ok not really but seriously it’s hilarious.) As always, you can hear bands and songs mentioned in this weekly blog on my radio show “Indie Flavour” on our campus radio station 90.7 WCLH fm.