Mesa blog: Be ready to take a chance 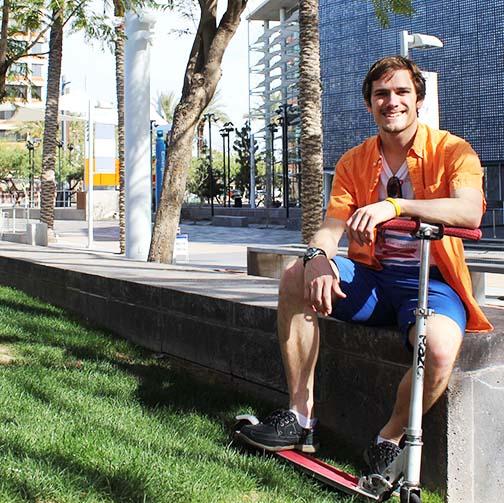 After being here for almost four months, I have experienced quite a bit. For all the future SiMesa-ers, I have put together a list of suggestions that have helped me have the time of my life.

Don’t get me wrong; the public transportation is great out here. I use it a lot, for cheap. But, there are places that public transportation does not go. For instance, Sedona is by far one of the most beautiful places I’ve ever been. Millions of years of history can be seen in a single rock.

I almost didn’t go because of housing issues in Wilkes-Barre. This was a suggestion from the school itself. If you want to go to Mesa, be careful about your housing your junior year. I almost had to pay double rent.

Everyone’s situation is different though; the only easy solution is for those living on campus. If you live off campus, you may need to find a sublet your apartment.

Keep an open mind, try to get out and try new things

Be willing to try new things. I have had such a great time just doing everything I can. Rarely I regret something I’ve done. I only regret what I haven’t done; the opportunities I’ve missed.

If you go to Mesa, or anywhere for that matter, don’t just sit around. Get outside; visit everywhere you can. I bought a bicycle to help me explore more; it was worth every cent. We’ve tried to climb all the mountains seen from the city.

To quote the 1999 film, Fight Club “This is your life, and it’s ending one minute at a time.” So if you’re spending it looking up Fight Club quotes locked away alone in your room, you’re doing it wrong.

Every single person on this trip almost backed out at one point or another. If you can make it out here, do it. Don’t hesitate. After being here, I can’t believe I ever thought about backing out. Will you miss home at times? Yes. But regret won’t be on your mind.

You have the choice to be part of the genesis of Wilkes’ branch in Mesa, or you could spend another semester at home, running through the motions. Looking back, I think the second one scares me more.

PS: Also, learn how to pronounce Spanish words. The Mexican food down here is great, but during the first few weeks, ordering is horrifically embarrassing.