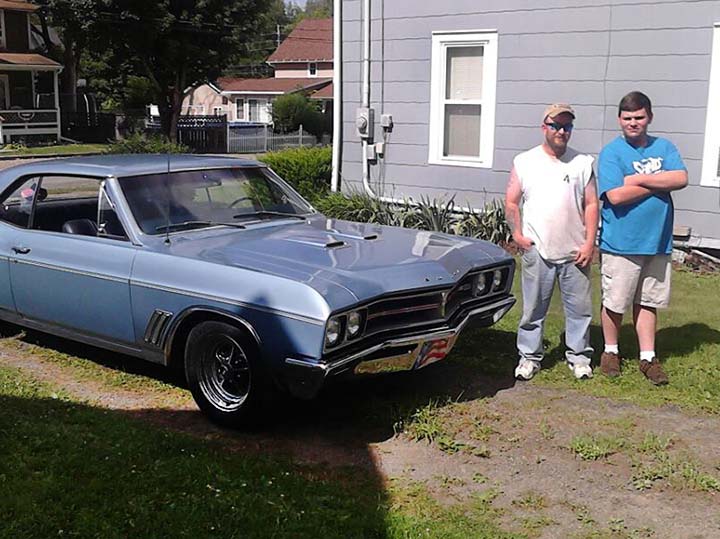 Zach Benedict, right, stands alongside his father and his grandfather's 1967 Buick.

AutoTalk is Zach Benedict’s new Beacon blog and radio program broadcast weekly on WCLH 90.7. Watch for it each week in the online Beacon and from 1-1:30 p.m. each Wednesday.

I started working on cars at a very young age. I helped my dad do simple routine maintenance on all our vehicles (which have all been American), do even helping him completely re-do his exhaust system on his 1985 Buick Regal T-Type.

Once dad got rid of that car, we never did any really intense work again until recently, where I helped him get his 1993 Buick Park Avenue back to a running condition.

The connection to cars doesn’t stop at my father. My grandfather worked at a Buick dealership (Van Atta Buick GMC) for 34 years. He had several cars that he would purchase and restore then sell them again.

He was a service master technician for those 34 years, and he taught me and my dad all sorts of tips and tricks he learned while he worked there, and tips from his childhood. This is where me and my dad’s love of Buick came to be. He and I not only see Buick as “grandma and grandpa’s car” – even though what I’ve said seems contradictory – we see Buick as a luxury performance car.

Not only was my grandfather passionate for Buick’s, he never lost touch with his roots, which was Fords. Dad and I really don’t care much for Ford. We don’t hate them, but we don’t like them.

My dad’s T-Type was the fraternal twin of the Regal Grand National, which was the fastest accelerating production vehicle ever made, and it still continues to be to this day with a 0-60 time of 4.9 seconds. My grandpa’s 1967 Buick GS400 was one of the muscle cars produced in the late ‘60s-early ‘70s.

The Gran Sport (GS) was one of the biggest competitors in the muscle car era, and yet, no one really recognizes the Gran Sport as a competitor, because of the title of “Buick.”

Aside from Buicks, I’ve only had experience with American automobiles, and I think that any American should have the same experiences that I’ve had. Not only are you supporting the cars made by Americans, you are also supporting the American economy. My radio show, “Auto Talk” is simply dedicated to the news of America’s automotive industry. I read the week’s news and give my personal opinion. You have to listen to the show to truly understand what it’s all about.

If there isn’t enough news to cover, I will go with a special themed day. The most recent theme was about the American muscle era. I gave a detailed look at the beginning of the era then slowly went to less and less detail until I came to the last year. I also gave my opinion on the cars themselves.

That’s my story with cars, and I hope you have a little more insight into my life. Auto Talk airs every Wednesday at 1 p.m. It’s not just me talking for the whole time, which is generally a half hour. I also play music related to cars.