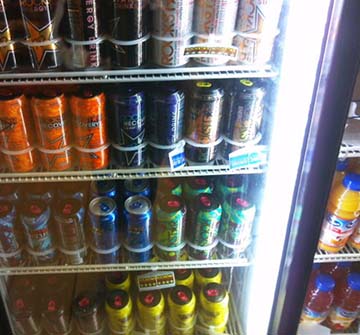 Energy drinks are readily available alongside sodas and fruit juice.

By now, most people have tried at least one of the many energy drinks on the market today, such as Monster, Amp or 5 Hour Energy. The main demographic that consumes these beverages are young men and women, either in college or in the work force.

All of these products claim to add a boost of energy to keep their consumers productive and perky for hours. However, it is important to keep in mind that these claims have not validated by the FDA and therefore should be looked upon with some skepticism.

The average person can usually tolerate about 200 to 300 milligrams of caffeine per day, which equates to about two to three cups of coffee. When individuals consume around 500 to 600 milligrams per day, they begin to experience insomnia, dehydration and an increased heart rate.

In some rare cases, overconsumption has been associated with an irregular heartbeat. Unfortunately, even after all of these negative reports, many people continue to drink these beverages.

The real danger occurs when energy drinks are mixed with alcohol, a practice common among many high school and college age students. In 2010, the FDA issued a statement that, based on the evidence derived from studies on the toxicology and neuropharmacology behind such drinks, they deemed caffeine to be an “unsafe additive” to any alcoholic beverage, especially for those individuals with a preexisting heart condition.

The FDA then issued warning letters to the numerous companies that produced caffeinated alcoholic beverages, ordering the removal of caffeine from their products with the threat of seizure of their companies or criminal penalties.

The high amounts of stimulants may mask the intoxicating effects of alcohol. This can cause the individual to perceive themselves as being completely sober, when that may not be the case at all. This perfect storm can lead to reckless choices, such as drunk driving or excessive drinking leading to alcohol poisoning.

The individual may also appear to have a worse hangover after consuming such beverages, which is no coincidence. Both alcohol and caffeine are diuretics, leading to excessive urination and dehydration. Should individuals mix alcohol and extremely caffeinated drinks, it is important that they drink plenty of water and behave responsibly by having a designated driver.